By now, the military has discovered that they're fighting a losing battle. They have ordered a full retreat and are now performing air strikes as a last option. In the following levels, although they will not disappear entirely, you will see less military personnel and more aliens, though the battle between them continues.

If you look up, you will be able to see the outline of the ceiling chunk about to fall before it does.
If you wish, you can lead the aliens back to the turret and flip the switch in the guardhouse to turn it on. 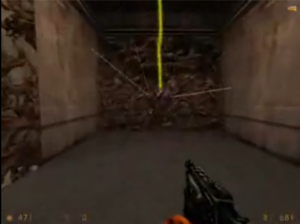 Approaching these spheres will cause them to break open and release a horde of snarks to chase you. 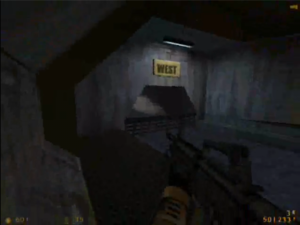 Jump and crouch over the grate guarding this canal into the water beyond.

At the top of the small set of stairs, save the game, and be careful. As you enter this room jump through the hole in the railing on your left as a chunk of the ceiling falls where you just were. The ceiling continues to fall in chunks, squishing everything under it. After the third chunk drops, jump up onto the shorter of the chunks and make your way over the fallen ceiling pieces to the door at the end of the room. Crouch and crawl through to find yourself in a run-down security station. 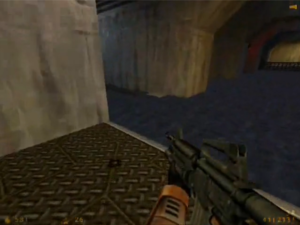 There's an Ichthyosaur in the pool to the right, so avoid it if you can. Instead, jump the concrete barrier into the canal on the left.

There is a radio spouting messages and a lever that controls a ceiling-mounted turret. A security guard is just outside the room hiding behind a large box. Jump out the window and enlist the guard for help. As you walk into the large part of this room, several alien grunts and vortigaunts warp in. Take them out quickly with the help of the security guard, then walk down the ramp.

To your left is a brown alien web blocking the path. Snarks and other aliens are hiding back there as well as some supplies, but it's really not worth it. Instead, go right and kill the vortigaunts that pop up in the hallway using the explosive boxes if you want. To your right is another glowing alien sphere that will erupt when you get close, sending a pack of snarks your way. Fire the hivehand at them as you retreat or run away until they explode, then head back and turn the valve wheel to open the hatch and climb on down.

At the bottom, there is a small room with a headcrab. Shoot it before it jumps through the lasers and activates the tripod mounted chaingun. Destroy the chaingun and go down the short tunnel. There are two canals here as well as several wandering headcrabs. Break the boxes for first aid kits, then crouch jump over the grating guarding the canal marked "West" into the water on the other side. Swim down the canal and get out on the small walkway to the left, shooting the headcrabs in your path. Around the bend is a deep pool that you want to avoid due to the Ichthyosaur patrolling the depths. Instead, jump to the left over the concrete barrier into another canal.

Between the two massive gears, damaging steam is at the surface, but there is also a room with an HEV charger if you think it's worth the risk.

This canal leads past several obstacles similar to those faced in Residue Processing. The first obstacle is an oversized gear churning the water. Crouch and swim under it, careful not to let it crush you against the wall. Here, there are pipes strewn in different directions that you must swim around while swinging your crowbar to hack more of those annoying Hagworms. There's damaging steam on the surface, so stay underwater until you get past the second massive gear.

Beyond the second gear is another deep pool of water, this time without the Ichthyosaur. Stationed outside this pool are a chaingun and a marine behind a sandbag. You are about to hit a cache of RPG rockets, so if you want to fire one or two to clear the next area, you can without worrying about losing valuable rockets. When it is safe, climb out of the pool and into the marine's nest. There are several rockets here and a ladder going up to the surface. Stock up on rockets, save the game, then climb up the ladder. 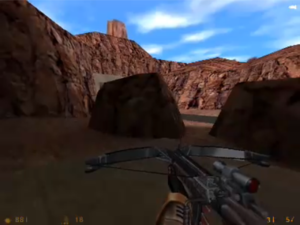 Use this rock formation for cover, but watch out for grenades lobbed over the top.

At the top of the ladder is another difficult firefight. There are two marines and a tank guarding the only exit out of the area. Kill the marines first, using the crossbow to take them out from a distance or letting them see you and come to you. Either way, make sure to stay well behind cover or you will get ripped to pieces by the tank's artillery fire. When the marines are down, take out the RPG and turn off the laser. Peek out one side of the rocks and fire a rocket at its turret, hiding quickly after. For the next shot, peek out of the other side of the rock to deliver another rocket. After several rockets, the tank's turret will finally explode, rendering it harmless. Go back down the ladder and replenish rockets before continuing past the tank. In the alcove behind the tank, watch out for a sneaky chaingun hiding behind the wall. Be sure to destroy it before heading into the elevator and taking it down into another lab. 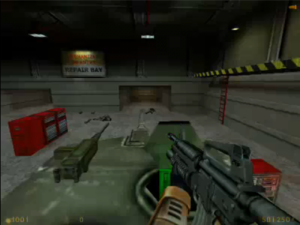 Use the green controls to blast the door open, then move to the smaller gun on the left to mow down the aliens.

At the bottom of the elevator (when's the last time we saw an elevator?), is a long corridor is covered with radioactive waste. Be careful where you walk, jumping over pools of radioactive waste. At the fork, take a left and navigate the wreckage to get to a battery in the corner. When you've gotten it, go back to the T-section and go the other direction. Around the corner, there are two marines hanging out on a small platform. Shoot them both and grab a health pack from a nearby room. There is a battery tucked away next to another large yellow machine (This one isn't leaking, though), opposite the stairs. Afterwards, continue up the stairs and into a larger room where a big battle is already going on. 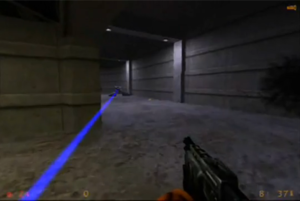 The alien cannon is brutal and is best taken down quickly with a heavy weapon, such as the Tau Cannon or RPG.

In this large room, there are several marines battling alien grunts, only this time, the marines have a tank. Wait for the battle to die down before crashing their party, killing all the survivors. When all's clear, drop down to the floor and break the boxes to collect health and ammo. Climb the small ladder up to the tank and use the green controls to fire the tank's main cannon into the door. When the door has been blasted, switch over to the tank's smaller minigun right next to you. When the door has been destroyed, several vortigaunts and alien grunts will warp in, so mow them down with the minigun. When you're sure that no more are coming, hop down from the tank and walk toward the door you blasted open.

There are alien grunts patrolling the hallway behind the door, so peek your head out and make them chase you. Set a laser mine or two and man the tank's controls as they chase you around the corner. Back in the hallway, most likely, an alien grunt or two remain, but your main concern is the energy cannon to the left. Gun down the alien grunt on the right, then focus on the grunt to the left and the cannon. The cannon is best fought with either the Tau Cannon or the RPG, but don't stay in its sights for too long, for it causes massive damage.

When the hallway is clear, go to the end and activate the large door using the controls on the wall. When you're through the door, hit the big yellow button to start the next level.