Well we managed to successfully navigate through Black Mesa's gratuitously violent industrial section and now we're back into civilized territory. This level takes place in the labs of Black Mesa where role playing is reversed as alien specimens are being probed by scientists, hence the name. I hope you're not too used to the absence of things to shoot, for the amount of enemy activity in this level is more than enough to make up for the last one. Speaking of enemies, you will soon be introduced to a formidable alien foe who will continue to make appearances throughout the rest of the game. But enough of the introduction, let's get into the game.

The beginning of this level doesn't bother taking it easy on you, but throws you right back into the fray. The ladder at the end of this passageway leads right up into a pen of Houndeyes. Smash the grate and take care of the Houndeyes however you can (the satchel charge or pistol work well here). 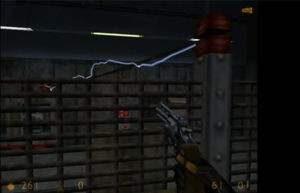 Shooting either the metal knob on top of the fence or the console on the wall will grant you freedom.

When you have established your place as top dog, check out the electrified fence. There is a little electrified ball connected to a console on the wall. Shooting either of these until it breaks will grant you freedom. There's a first aid station for you to use if the green goo got the best of you in the previous level.

Beyond this room, you will find an Alien Grunt trapped in a containment tube and a locked door. In order to unlock the door, you must break the glass guarding a red button which will also release the Alien Grunt. You can either shoot him or run for your life. If you still have a satchel charge, drop it in front of him and detonate it from the other side of the tube as soon as he breaks out. Either way, head through the newly opened door to a special room with a cage of Headcrabs in the center. Enter the booth and press the button. Gape in wonder at the awe inspiring power that is unleashed at the simple press of a button. When all that remains of the creatures are chunks, exit the booth and open the door. There is a marine standing right outside the door, so lure him in, run back into the booth, and press the button. You almost feel bad for the guy as he scrambles around trying to figure out what to do before being utterly destroyed. On the bright side, you now have a assault rifle. Around the corner, you will find a security guard (How he avoided that marine, we'll never know). He'll tell you how to get out of here. Listen to him and have him follow you around the corner. 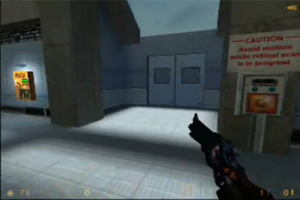 The next level is right through these doors. All you need is someone to open them for you.

Continue down this hallway to the main entryway. There are two marines in this room that can be taken care of easily with an assault rifle grenade or a few .357 Magnum shots. When these two are down, two more will enter, one carrying a shotgun. Greet them with a few bullets, then use the HEV station to charge up your suit. Go straight across and up some stairs to a balcony looking over the area you just visited. Leave the guard behind, then head into the next room, which is similar to the first one you encountered. Press the button to release a bunch of Headcrabs, then head into the booth to fry them. Afterward, go into the alcove the creatures came from to find a crossbow and some Snarks. Go back and grab the security guard and head into the next room. Take a right at the fork and take out another pair of grunts. 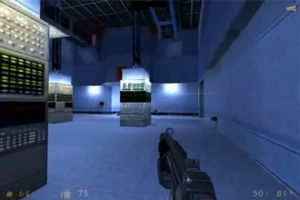 Don't destroy these laser mines until you are ready.

You will eventually get to a large room with a bunch of computer columns in the center and some laser mines blocking a hallway. Ignore the laser mines for now and just grab the batteries. Take the security guard up a ramp to a balcony that overlooks the larger room. From here, use your pistol and take out the laser mines. See why it was a good idea to wait? Try to look inconspicuous for as long as possible, although it is likely that an enemy of one side or another will come up to pay you a visit. After the battle, head back down and clean up any survivors. Then head through the doorway that the laser mines were guarding.

Be wary, for a grunt will try to ambush you down this hallway. Eventually, you will get to a large doorway with a pile of crates blocking the way. There is a laser mine aimed at one of these boxes, so save the game before attempting to clear the path. Through this way are several cages of Headcrabs that will break the glass and attack you as you pass. Take the first path to the left and up the stairs. At the top, you will see an ongoing fight between bullsquids and marines. Wait until the battle dies down before going out into the hallway.

Start down the hallway, taking out any enemies in your way. The first room on the right is a small lab with batteries on a shelf. Take these, then walk around the the console in the far corner of the room. Push the large, conspicuous button to activate the laser. This is one of four smaller lasers that will combine to form one larger laser later in the level. Taking care not to walk in the laser's path, exit out into the hallway and continue down the corridor. Take the left fork and stop just short of the orange explosive boxes. After the security guard's ineptness causes him to explode, enter the room. There's another laser to activate in this room as well as an experimental weapon: the Tau Cannon. You really should save your ammo for this weapon for when you really need it. If you really want to play around with it, make sure to save the game first, as uranium is not all that common around the Black Mesa Facility. 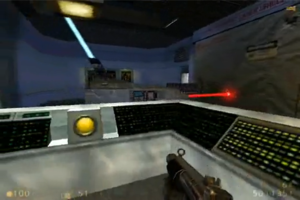 Go back to the main hallway and take a left. The next room on the left contains a bunch of Houndeyes as well as another laser you need to activate. At the end of the hallway, there's another lab and laser to activate. This room also has ammunition for the Tau Cannon lining the walls. If you're low on ammo, you can break apart the wooden boxes at the end of the hall, but there's probably a grunt or two hiding back there, so be careful. Head back down the hall and into the room on your left containing the main laser. If you've activated all of the minor lasers in the other labs, you should be able to activate the Super Mega Awesome Laser using the shielded console in the corner. Hit the button and watch what happens.

The laser will fire into the blast shield for a while, then shut down. Kind of boring, right? Do you see that sign above the shield that says "Do Not Obstruct Laser Shield"? Well, since nobody's looking and we're not paying for it, let's see what happens if we obstruct the laser shield. That should make things interesting. Check the far corner of the room for a metal crate and move it into the path of the lowering blast shield. When it is in place, go back to the console and hit the button again. If you did it right, the blast shield will lower, hit the metal box, then raise up again and the laser will fire into the wall. This time, it is much more interesting. After a few seconds, the laser will take out the entire wall before shutting off. Sweet. Totally worth it. 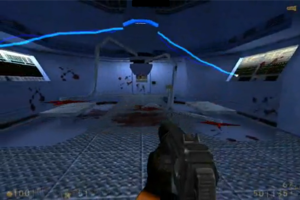 I don't even want to know what they used this device for.

Go over to the new "door" and look down. It's a long fall. Make sure to save the game here before trying to get down, lest you slip and take unnecessary damage. Look for the large pipe on the left and crawl on the ledge until you can jump down to it. From there, aim for the boxes off to the side, then jump to the floor. Through the door, you will find the scientists you have been looking for, unfortunately, there is a giant rotor in the way (What useful purpose could this machine possibly have?). Properly time your movements so you don't get sliced (it's a good thing we got all that practice on the previous level!) or try to get around it. Either way, shut it down on with the control panel the other side before you get a scientist to follow you out.

From here, all you need to do is get one of these scientists to the main entry and use him to get through the front doors. Outside the door, go left, then take the next right. This takes you through the hallway where the headcrabs ambushed you earlier. Go to the end of this hallway, around the corner, and through the door. This door leads to the main entrance. There may be some marines in here if you didn't get them all earlier. If one of the scientists dies, you should be alright- there are three of them, so you have 3 chances. When all the danger is gone, lead a scientist to the door and he should do the rest.

Outside, there is a grunt to your right and two autoguns on the roof. The tunnel on your right contains several boxes of supplies as well as a few explosive crates. Shoot these from a distance and enter the tunnel. Activate the large door at the end of the tunnel and walk through into the next level.