Thank goodness that the soldiers, instead of just shooting you, beat you up and dropped you into a garbage compactor, leaving before making sure you're dead. The worst news is that all of the weapons that you acquired so far are now gone. 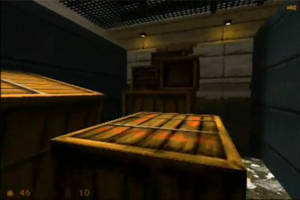 The boxes create a stairway to your freedom.

To get out of the pit, simply jump up the boxes conveniently stacked like a stairway. Take your time, you have plenty of it. Focus more on making the next jump correctly rather than doing it quickly.

When the compactor has completely closed (hopefully not with you in it), cross the top of the crushers to the ledge on the other side. Over on this ledge, you'll find a crowbar. Take the ladder down to the floor and use your newly acquired crowbar to break open the grate. See the light? Slowly and dramatically walk toward it. 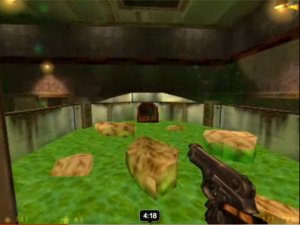 Floating pieces of who-knows-what in a vat of delicious green goo.

The tunnel dumps you out into the bright sunshine, surrounded by ponds of goo. Unless you are skilled at taking out headcrabs without taking damage, avoid them and run straight across the opening to the silo. Turn the wheel labeled "Flow Control" on the side of the silo all the way, climb the ladder up to the top as quickly as possible, and jump in. The platform should lower you to yet another small opening. At the end of this crawlspace is a small room where you'll see a security guard successfully shoot a few headcrabs, but then get grabbed by a barnacle. At least the barnacle didn't digest the guard's pistol.

Grab the pistol while the barnacle is occupied, or ride the barnacle up and hit it with your crowbar if you're feeling gratuitously malicious. Once you have the pistol, climb up the ladder on the side of the large container. Jump across the floating dinosaur testicles, or whatever they are, to the grate at the other side. Put that crowbar to good use and crawl on to the next part.

You emerge in a room full of giant mixers and hydraulic pumps. Look across the room and find the tunnel with a red light. This is your final destination. Jump across the mixers as they go up and down, taking care not to get dipped into the green sludge. In the tunnel bathed in red light, there are two pipes. Walk along the left one, then jump across to the right one beyond the section where it has broken. Around the corner are two more vats of delicious green goo. Time your jumps so you get across the mixers and into yet another dark crawlspace (alternatively just walk along the edges, but beware, they are wet and slippery, so walk slowly). This one leads to a room with crates of ammo and the first of many conveyor belts. Break the crates to get supplies, then jump on the conveyor belt and let it carry you into the next area, wondering if this is how the scientists who worked here before the accident got around the facility. 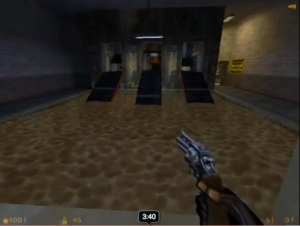 These three conveyor belts go to the same place.

The belt drops you off into a pool of water (thankfully, the green goo is gone, but there are still falling gibs.). Let the current carry you until you spot the underwater grinder. Make sure you get out and onto the ledge before it sucks you in. Walk through the door, bypassing the rotor, and jump right back in. Swim under the wall and past the rotor on the left. Make sure to duck underwater through the jets of flame. There is a room up in this area that leads to a first aid station, but I wouldn't advise it unless you are really low on health. Keep following the water tunnel until you can surface.

In this new area, there is a guardroom with a bullsquid in it. After killing it, search the room to find batteries, satchel charges, a .357 magnum, and other supplies. Make sure that you grab the satchel charges, as they are necessary later in the level. Walking in the other direction on the walkway where you surfaced will take you to a room with 3 levers marked "Conveyor Control". Activate the middle switch, then head back to the guard room. There's a button in here that stops the pistons. Hit the button when one of the pistons is up (it doesn't really matter which one), and hurry out and up that conveyor belt.

Crouch under the pistons and continue following the belt. You'll run into a series of various munchers, squishers, and pulverizers that I recommend you avoid. To make it easier, run toward a piston or hammer while it is extended so when it slides back, you run right by it. 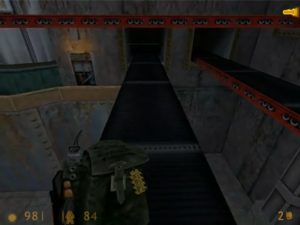 The laser mine emits a tell-tale blue-green light. Shoot this one, but be wary of one round the corner. You'll need a satchel charge to get by it.

After the pistons, hammers, and other malicious machines, you enter a large room with more vats of goo and many different conveyor belts going in all directions. The belt you're currently on is headed for one such vat, so spot the conveyor belt to your right and jump down to it. (NOTE: At this point you can follow the conveyor backwards, crouch through and follow the tunnel and it will take you straight to the point with two conveyors and a laser mine explained later) If you're not very good at jumping, I would advise saving after each successful attempt. If you do fall to the bottom, if the impact or the bullsquid lurking down there don't kill you, there is a path that leads back to the top so you can try again. After passing through the tunnel, drop to the conveyor belt passing below the one you're on. This belt will also take you through a tunnel (you have to crouch to get through it). Drop down to yet another belt. This one takes you through a tunnel that spouts flames, so run to get through it as quickly as possible. Since this strategy seems to be working so well, after this tunnel, drop down to another conveyor belt. Continue this strategy until there are two belts below you. If you look to the left, you'll see the exit of the first conveyer is guarded by a laser mine. This is where you want to go, but you'll need to get to a safe distance to shoot it. Drop onto the second conveyor, heading to your right. After you enter the tunnel, you can cross back over to the first conveyor. Have your pistol ready, and shoot the laser mine from as far away as you can.

Let the belt carry you through these tunnels to a series of giant rollers. Jump between the two conveyor belts, avoiding the rollers until the belt ends above a giant slicer. Time your jump so you don't fall and die and you'll land on another belt that leads to another pit of toxic goo! Jump across the gap and climb the ladder. Follow the hallway around several tight turns into the next level.