Half-Life was released for the PC on November 20, 1998. The game was developed by Valve Software and was published by Sierra Entertainment (the deal with Sierra is now expired). Numerous expansion packs and mods followed in Half-Life's footsteps, such as Counter-Strike and Half-Life: Opposing Force. Half-Life: Blue Shift, a Half-Life expansion pack released on June 12, 2001, added the High Definition Pack, which included new models, weapons, and items. Due to Half-Life's huge success on the PC, it was then ported to the PlayStation 2 on October 29, 2001 by Gearbox Software. When Half-Life 2 was released on November 16, 2004, a Source version of Half-Life was also included. Half-Life: Source included the Havok physics system, dynamic lighting, new shaders, and improved A.I. 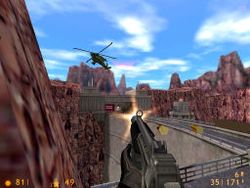 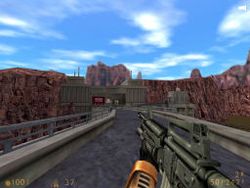 The PlayStation 2 version also featured the High Definition Pack. However, the game ran at a very low resolution, so many areas looked unpolished and choppy. It also suffered from several framerate problems during intense battles. 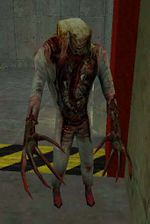 The most memorable part of the PlayStation 2 version was the included co-op play (called Decay). It featured nine exclusive missions which are not available to the PC version of Half-Life. Both players assume the roles of scientists with completely different storylines. The PS2 version also gave the ability to play as a Vortigaunt (accessed by a cheat code). The single player campaign also has several level re-designs (which will be covered in the guide).

The PC version is still the winner in graphics, as it can support higher resolutions and can also come with the High Definition Pack.

The Source engine also supports higher resolutions and features such as anti-aliasing and anisotropic filtering, which smooth jagged edges and improve texture quality, respectively. Half-Life: Source still uses the old models and textures from the original Half-Life, with some improvements.

When compared to the original, Half-Life: Source offers much better graphics with higher resolution support, shaders, AA and AF, and dynamic lighting. Below is a screenshot of Half-Life: Source's water:

Notice the huge difference in the water and lighting.

The Source version also has brand new menu designs and a 3D background for the main menu, which is very similar to Half-Life 2's.

A complete fan remake of the game is underway entitled Black Mesa. It utilises the Half-Life 2 game engine and brings the graphical detail up to modern standards, as well as gameplay enhancements.