Half-Life's weapons are quite varied, and in some cases are a little difficult to use unless you know the tricks of the trade. Many of them are better suited to certain situations (and enemies) than others.

The crowbar is the first weapon you find. It comes in handy for destroying glass, crates, or other obstacles that aren't worth wasting valuable ammunition on. The upsides of the crowbar are that you can swing it quickly and it doesn't require ammo. On the flip side, you have to literally be in an enemy's face in order to use it. It is good for use against swarms of weaker enemies, such as hagworms or headcrabs, or slower enemies, like mawmen. The crowbar is also a good choice in close quarters or when ammunition is limited.

The 9mm pistol, a Glock 17, isn't very powerful, but it is useful for taking out weaker enemies, like houndeyes or headcrabs, from a distance. Primary fire shoots slowly but accurately, while secondary fire shoots faster but sacrifices accuracy. In addition, the pistol is one of only two ranged weapons in the game that works underwater. If you have the High-Definition Pack installed, the pistol takes the shape of a Beretta 92FS - it behaves exactly the same, however.

The magnum is a much more powerful handgun than the pistol, capable of killing zombies, vortigaunts, or marines with a single well-placed shot to the head. Because it delivers damage in one solid hit, it is useful in situations where you must duck out of cover, fire a shot, then duck back into cover. The magnum is one of the most accurate long-range weapons, along with the pistol, and is effective against distant targets, like Xen Masters, as well as close range targets. In deathmatch mode, the magnum sports a lasersight which enables you to zoom in with the alternate fire key.

The Heckler & Koch MP5, also known as the Submachine Gun (SMG), assault rifle, and combat rifle, is a rapid-fire weapon that uses the same 9mm ammunition as the pistol. It is a good weapon to use if you don't know what the situation ahead is. It is almost as accurate as the pistol at long distances, and the attached grenade launcher is extremely effective at taking out hordes of small enemies or single larger enemies. If you have the High-Definition Pack installed, this weapon becomes an M4 Carbine with grenade launcher, yet, strangely, still uses the same ammunition as the pistol.

The shotgun fires a group of small pellets that scatter over distance. For this reason, the shotgun is only effective in close-range situations. The primary fire shoots out of only one barrel, while secondary fire mode shoots with both barrels at once. The major disadvantages of this weapon are that it is ineffective at long ranges and it takes longer than other weapons to reload. A common tactic for the shotgun is to peep out from around a corner and let the enemy see you before sinking back behind a wall, then shoot the enemy as it rounds the corner. It can be very powerful if used properly, and is especially effective against medium range enemies, like bullsquids and grunts. 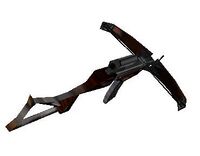 The crossbow serves as Half-Life's sniper weapon. It's silent, it has a scope, and deals more damage in a single shot than the magnum. Using the secondary fire mode will enable you to look through the scope, though it doesn't cause it to fire any differently. Although the crossbow is powerful, ammo is limited compared to other weapons available in the game and it has an eternally long reload time. On the bright side, the crossbow is one of the few weapons that works underwater, along with the pistol and grenades, and is therefore essential for taking out Ichthyosaurs. In multiplayer, the crossbow's darts will explode on contact if you're not using the scope.

The RPG is a very powerful rocket launcher with a laser-guide feature. In primary fire mode, the rocket will fly in a straight line. This is useful when you need to shoot at a relatively stationary target, such as a tank, then run back into cover. The secondary fire mode will turn on the laser guiding system. This will cause the launched rocket to follow the laser after being fired, making it easier to hit highly mobile targets, such as Apache Helicopters. The RPG is more powerful than a standard grenade and is much easier to control and can reach longer distances than a thrown grenade. On the downside, it takes a long time to reload and you must reload after each shot. In addition, ammo for the RPG is scarce.

The Tau Cannon is an experimental energy rifle whose shots are capable of penetrating solid walls. Though it doesn't look like it is very damaging, it can fire very rapidly and doesn't ever need to be reloaded. It's secondary fire mode, when fully charged, will fire an extremely damaging beam of energy, knocking you back. This is very effective in taking down heavily armored enemies, like Apache Helicopters or gun emplacements. In multiplayer, the secondary fire is also used to make extremely high jumps or survive long falls. When charged to its fullest, aim down, and release to launch yourself into the air or to break a long fall. 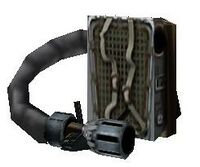 The Gluon Gun is the last weapon you'll run into during the game. When fired, it sends a constant stream of extremely damaging energy which can vaporize just about anything in a matter of seconds. Be wary, though, as the Gluon Gun is notorious for burning through energy. It is useful when you are facing a singular great enemy or many small enemies that you must destroy quickly. Otherwise, it's rate of ammo depletion makes the Tau Cannon a much more efficient use of uranium energy.

The hivehand is basically the severed arm of an alien grunt, but you won't get one for yourself until after you have taken many of them down. The hivehand's primany fire mode shoots homing hornets at enemies. The secondary fire mode shoots faster non-homing hornets in rapid succession. The hivehand constantly regenerates ammunition (as long as it is equipped) and, because it has homing capabilities, it more effective than the pistol at taking out smaller, bothersome foes as well as constantly regenerating ones, such as the xen masters of later levels. Although the hivehand is very useful during single-player mode, in multiplayer mode, the hivehand tends to lag games and leaves an orange trail, revealing your position. Because of this and the fact that it is one of the weaker weapons in the game, it should be avoided in multiplayer games whenever possible.

Fragmentation grenades are very useful is used correctly, but it may take some practice to master using them. Because it doesn't use a crosshair and the fact that it can bounce around before detonating, grenades can be hard to aim. The delay and ability to bounce around before detonating, however, are what make the hand grenade so valuable. It can be lobbed over obstacles or around corners to flush out an enemy or to take out an unseen laser mine. Grenades require creativity and skill to use, especially in multiplayer matches.

Satchel charges are small packages of explosives that can be detonated on command. Primary fire will allow you to throw one, while secondary fire will allow you to throw multiple charges before detonating. Generally, they are easier to use than the other explosives available in the game, if only for the manual detonation. There are several areas of the game where it is necessary to send a charge to detonate trip mines blocking the path that cannot be cleared any other way. In multiplayer matches, these are the most useful of the explosives because they can be triggered on command. They work well placed around blind corners or among satchel charges that spawn naturally, as unwary players may not distinguish the active charges from the spawned charges.

Laser tripmines are exactly what their name implies: laser triggered explosives. These explosives, recognizable by their tell-tale blue-green laser, make their first appearance in "We've Got Hostiles!". To use a laser mine, simply place it on any surface. The tripmine will make a distinctive series of beeping sounds before it engages its laser. When the blue-green laser appears, the mine is active and will not differentiate between friend or foe, so be very careful around them. To disarm a tripmine, you can either shoot the mine or detonate an explosive next to it (it is never advisable to try and bash it off with your crowbar). Laser mines are most effective against enemies that will chase you when they see you, like assassins or marines. In earlier versions of Half-Life, you could use these as stairs in deathmatch by placing them on walls and jumping on top of them. However, recent Steam versions have "fixed" this by disabling collision detection on the tripmines.

Snarks are little aliens that would love to peck your face off. While they are seen in the single-player game as enemies, you can also pick up a pack of your own to throw at the human enemies. Be careful in using them, as, much like the laser mines, they don't distinguish between friend and foe. If you throw one when there are no enemies around or they run out of enemies, they will not hesitate to turn on you. Snarks have almost no health and die after taking the least amount of damage or on their own after 15 seconds. They are most devastating when unleashed in groups and are one of the more effective weapons against assassins. When encountered in the game, because of their incredible speed and small size, the best strategy is to run and wait for their 15 seconds of life to expire, at which point they explode into little green chunks. There's a small glitch with snarks in which you can stack them underneath yourself to create a short platform. By aiming directly under your feet and firing, you'll create them underneath yourself, thus lifting you upwards slightly.