You've done very well to have come this far. This next level introduces the alien world of Xen. It is an extremely short level meant to get you used to Xen's unique features. There is less gravity here and the the atmosphere is very different than when you were on back Earth. That's right, you're on their turf now.

How Do I Get Off This Thing?[edit] 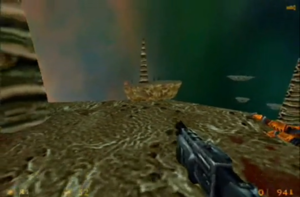 When you land on this island, a Vortigaunt and a Houndeye will teleport in.

Your first task will be to get from the floating rock island you are on to the mainland below. You'll have to do this by jumping to lower platforms until you are low enough to make the jump. It may seem like there's nowhere to jump, but you have the long-jump module and the gravity here is diminished.

From where you are, crouch jump to the nearest floating rock. There's a guy here with a canister of supplies, but since he doesn't really need it anymore, go ahead and take it. There's a vortigaunt waiting for you on the next rock, so take out the crossbow and fire a bolt at him. A Houndeye and a Vortigaunt will teleport in when you land on the next rock, so be ready for it.

From here, it's just a matter of jumping from platform to platform until you're close enough to the surface to jump to it. Remember, don't think that just because you're floating around in space that gravity doesn't apply. Get as close to the ground as you can before dropping down. If there's another platform circling lower, make sure to jump to it first. With the long-jump module, you can jump extreme distances. Also remember that if it looks like you're going to overshoot your target, you can simply press  ↓  (or whatever your move-backward key is) to stop mid-jump. 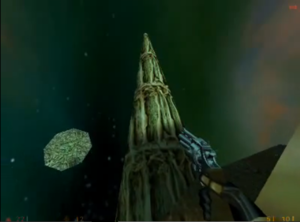 Try to land on this floating platform so you can take out the Houndeyes from afar.

When you get down to the ground, it looks pretty barren. There's not much to do here but wander around, so go to the edge of the giant floating space rock and look down. You'll see one of two giant extending spikes and, eventually, a platform that is hovering around below your level. Jump to this platform when you see it go by.

This platform gives you a view of the underside of the rock, where all the action is. As you hover around the giant rock, fire hivehand hornets at Houndeyes you see so they won't be a threat later. As you pass the violet lanterns, duck down and back as far away from them as you can or they will shoot violet rays at you. When the houndeyes are gone, jump from the platform to one of the giant spikes and walk onto the main rock. 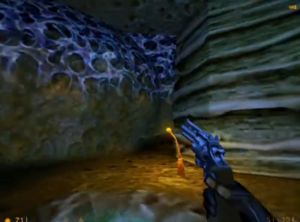 Go through this little cave to reach the center of the floating rock.

There are several new things here to take note of. The first is the violet lanterns hanging from the ceiling. If you approach them, they will shoot electricity at you unless you destroy them. The next is the small bioluminescent organisms. They will retract if you approach them, but they won't hurt you. The last thing that you may find here is a small light blue glowing pool of water. This pool will heal you if you stand in the center. When you've found the healing pool, look around and you will find a hole in the wall that leads to the center of the giant rock.

Crawl through this opening to find yourself in a small chamber. There are three pedestals in this room with claw-like devices on top. Approach each one and "use" it to open the claws. When all three are open, look around for some netting covering some yellow butterflies. Hack away the netting with your crowbar and release the butterflies. They will fly around for a while before settling on the open pedestals. When all three have landed, they will create a teleporter in the center of the room. Jump into the teleporter to enter the next level.