The fourth chapter will

After you and your friends reach the next floor, you will see a door on the opposite side of the room. It can only be opened by torch, and you can collect a mine and a shotgun in the security office in the next room.

Head up the stairs, and a vortigaunt will bash down the door. In the next room, two additional vortigaunts appear in the room to the right. In the room ahead, it will appear to be empty, but enemy vortigaunts and grunts will both drop from the ceiling.

Turn right into an office. You can find an enemy behind the projection screen, and a medikit. Head towards the medikit, and the nearby wall will break open. Pass through to reach a room with a broken wall. 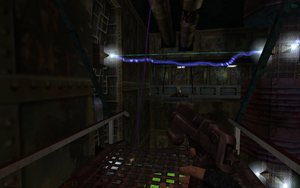 An electrical arc prevents you from jumping across

Enter the hole and climb to the top as far as you can, collecting the HEV charge as you climb up. There are barnicles near the ladder, which may either be shot or avoided. Next, jump across the gap and go through the door.

After the left turn, you will be attacked by two grunts. The first is killed by shooting the explosives crates behind him, while the second will need to be hit from across the bridge. You will need to cross over, but will have to disable the electrical arcs first. Shoot one of the ends of the arc to disable it and climb across the wires to the bridge. Head up the lift and collect the shotgun and ammunition. You can also use the radio to hear reports of the black ops that have arrived.

At the end of the corridor, you should have access to the surface. Climb up and you will find a medic that will tell you of a passage heading to the extraction in Lambda facility, but the way is sealed. You need to find an engineer.

Enter the broken ductwork to your left. You will hear two black ops talking about a package, a reference to a future event. Destroy the grate blocking you, and kill the three black ops within the room. The engineer is behind the door on the right-hand side of the room, and the exit is on the left-hand side. If you haven't done so already, open the door, disarm the two mines, and take out the turret. Escort the medic to the engineer, and escort the engineer to the sealed door.

Past the door is a turret, which was activated. Take it out, disarm the two wall mines, and meet two new soldiers. They will also comment on the black ops, and are needed in the room ahead.

The assassins found in the following room, unlike those found in Lambda Core, will not turn invisible, but will instead perform backflips to confuse you. If they give too much trouble, get your two soldiers to assist as much as they can.

Reach the switch on the upper floor to open the railway. Walk along until you reach a path to the left. You will encounter a combination of heavy black ops and fast black-ops, most of which can be found after the PCV charger. If the two other soldiers are alive, they can take out some of them, helping you to reach the switch at the end to open the blast door.

When the blast door is open, return to the tram, and move it back. Shoot the switch on the wall to make the tram turn right, and move the tram forward. At the end of the railway, you will encounter one last black-op on your left, behind the sandbag wall. Behind him is a room that can be entered through the window. Climb on the pipe sticking through the window (using the barrel if necessary), and enter the vents to reach the next chapter.