Half-Life: Opposing Force/We are Pulling Out

The tram ride in this section, unlike the tram rides of Freeman and Calhoun, is short and will have an enemy appear and attack you. Shortly after this single encounter, you will approach a platform, where you disembark. 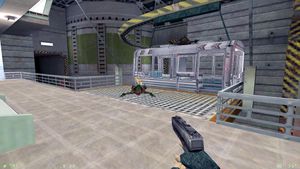 Two aliens trying to attack from behind

Exit the platform and ready your shotgun. Just before you reach the Glock 17, two vortigaunts will teleport from the tram and attack; the first will appear on the platform, and the other on top of the tram. Kill them before picking up the glock, as it deals less damage.

Head around the corner and you will find an overweight security guard named Otis trying to steal from a vending machine. Press E next to Otis to get him to follow you. Take him through the corridor, killing the headcrabs, zombies and hound eyes. Be careful when fighting near Otis because he will shoot you if you stand between him and an enemy. When you see Barney and a scientist talking, a new alien will appear and kill both of them. Jump through the window, and open the door for Otis.

Otis will unlock a door containing a few grenades for an MP5 you'll pick up shortly.

Go on the elevator and press the button to raise it. You will hear gunfire from allied soldiers, but they will get killed. Dispatch the one or two enemies at the top of the lift, and recharge the PCV. 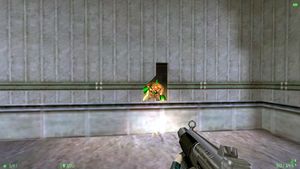 An alien breaking down a wall

Head through the vent above the HEV charger, and climb the ladder to the top. You will reach a military rally point, where a soldier uses a radio, and another tried beating information from a scientist.

The closet containing the scientist and soldier contains a few HEV charge cells. You can collect them either by going through a raised wall vent on the floor below, or by committing friendly-fire by killing the soldier. In either case, proceed down the stairs to the helicopter.

However, the helicopter access is closed and it takes off without you. Instead, the only route out will be through a wall which an alien tries to burst through. Proceed into this hole to start the next chapter.