Welcome to Point Insertion, the first level of Half Life 2.

The iconic start to the game. 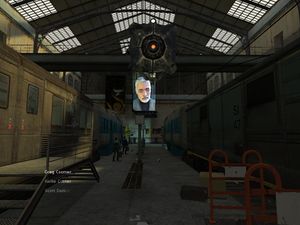 Your entry into the world of Half-Life 2.

After helpful words of “advice” from G-man and a few hints as to what happens since you last entered the world of Half-Life, the game opens in a similar manner to the first: on a train bound to destinations unknown. Out of the windows you can see a run down old train yard, the train you're in quickly approaching your next stop. Stepping out of the train and onto the platform, you are instantly photographed by a flying robot and greeted by the first of many “Breencasts” informing you that you are in City 17. Follow the passengers off the platform, avoiding the Metrocops, who are out to make your life difficult. It should be noted that if you get hit by their stun sticks or shot, you do get hurt; there is simply no visual representation of your health without the HEV suit. Moving through the lines you are directed to a platform labelled Nova Prospekt, but before boarding, you are stopped by security. Follow the orders of the officer to an interrogation room with a worrying stain on the floor. The cop locks the door; is it over already?

More of the train station.

Submissive
Put the can in the trash.

Defiant
Hit the trashcan cop with the can.

Not really, as he turns out to be Barney Calhoun working incognito. Calling up Dr. Kleiner, they decide that the best idea is to send you to the good doctor’s lab and that Gordon needs to look out for Alyx (who is nearby). Before you get any useful information (like locations), the real Metrocops try to barge in. Barney hustles you out a side door and tells you to stack some boxes and climb out the window. This task is the first in the series of rolling lessons; Valve doesn’t have a tutorial level but simply gives you hints as the game progresses. Don’t worry if the mechanics of lifting and carrying escape you; once you get the gravity gun, manual lifting becomes unnecessary. Exiting the courtyard, you find yourself in the main body of the train station. Another lifting and carrying task awaits you with a Metrocop ordering you to put a can in the bin. You can do as he says or just throw the can at him; both choices have an achievement attached, but to get both you will need to load a save prior to the can decision and go with the other option. Keep working through the station until reaching a pair of double doors that lead to the square. 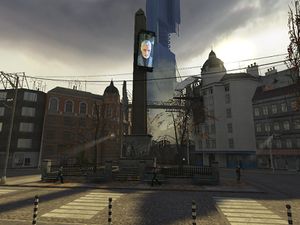 City 17 square, with the gigantic Citadel in the distance.

Feel free to look around, although the correct way forward is to make a sharp right from the station where you can see a Metrocop roadblock up ahead. Climb the ladder in the nearby alleyway and jump over to the other side, landing on the dumpster below and taking a right at the intersection. If you eavesdrop on the two citizens standing outside the apartment, you get an idea of what life is like under Combine oppression. Walk through the playground and you will hear the ghostly laughter of children. There is an open building to the left; enter it and proceed down the hallway. 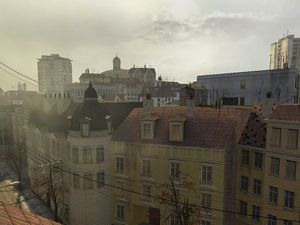 The narrow rooftops of City 17…careful not to fall off!

Heading up the stairs is a good place to go, where you will see a Metrocop raid in action. Examine the rooms if you wish but go straight on, past the raid and up the stairs with the cops now following you. On the next floor the friendly citizens help directing you towards the roof; don’t stop now, the cops can eventually catch up and swarm you. Proceed to the roof and climb out the large opening in the corner. The Metrocops will now fire their standard handguns with a couple of Combine gunships hot on your heels. Keep running (the path is obvious) and don’t stop as you are liable to get killed in a hail of fire from APCs and gunships (be careful not to fall off, as this results in an instant death). Eventually you reach a couple of windows you can climb through to reach yet another attic. Head down the stairs (which are wrecked in the process), open one of the doors and go into a corridor... filled with cops. They knock you out with their stunsticks and everything goes white…although the grunts of pain you hear are not yours. The mysterious Alyx Vance (who was mentioned before) has come to your rescue; follow her to the next level.