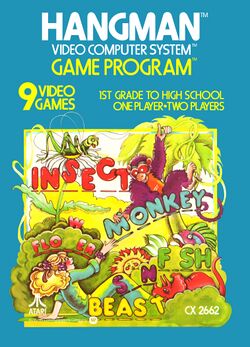 Hangman was one of the eleven Atari 2600 titles that were part of the second wave of games released in 1978. It is based on the old words guessing game played with paper and pen. The player msut guess which letters compose a word. Every wrong guess adds to the diagram of a man being hung, or in the case of this game, a monkey hanging from a bar. Eleven wrong guesses ends the game. Games can be played as one or two player games, and different grade levels of words. Two players can even provide the words for one another. of This game was released as Spelling under the Sears Tele-Games label. 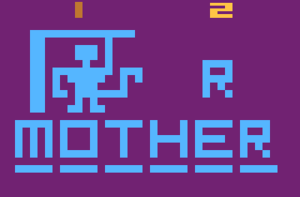 Game variations are determined by two things; the number of players, and the highest grade level that each word can be selected from. Games 1 through 4 are single player games, while Games 5 through 8 are two player games. In a two player game, each player takes turns entering letters. Each correct guess earns the player another guess. The winner is the person who correctly guesses the complete word. Game 9 is a two player game as well, where each player provides 6 letter words for their opponent (the opponent must look away while the word is being entered.) If the opponent guesses the correct word, they earn one point. The first player to reach five points wins.

In the English language, the 12 most commonly occurring letters are, in descending order: e-t-a-o-i-n-s-h-r-d-l-u. This and other letter-frequency lists are used by the guessing player to increase the odds when it is their turn to guess. On the other hand, the same lists can be used by the hangman (the non-guessing player) to stump his/her opponent by choosing a difficult word to guess (e.g. rhythm) or one that contains rare letters (e.g. quartz or zephyr).