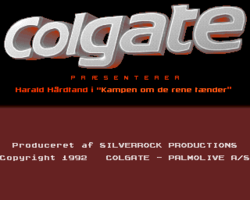 Harald Hårdtand: Kampen om de Rene Tænder (English translation: Harald Hardtooth: Fight of the Clean Teeth) is: an action game that was developed by Silverrock Productions for Colgate-Palmolive, and released on the Commodore 64 and Commodore Amiga in 1992 only in Denmark; a promotional game for Colgate toothpaste, the player must use a joystick to take control for the eponymous Harald Hårdtand (an anthropomorphised bow-tie-wearing tooth who was the company's mascot at the time).

During the game's attract sequence, you can either push 1 (or the button on the joystick) to start a 1-player game, 2 to start a 2-player game (both players alternate turns), 3 for information about dentistry or 4 for the game's instructions; however, the dentistry information and game instructions are, like the rest of the game's on-screen text, in its home country's language of Danish, so these are not going to be described here. Pushing the joystick left or right makes Harald walk to the left or right respectively, while pushing it up or down makes him jump up or down to the platform above or below him (however, pushing the joystick down while he is on the lowest level has no effect) - and pressing the button makes Harald fire a shot from the tube of Colgate toothpaste he yields at the bacteria that have infected the mouths in which this game takes place (the amount of toothpaste left in the tube is also indicated by that white line at the top of the screen, and once he's depleted his supply, pressing the button has no effect). There are four types of bacteria: Slasker (green) which take three shots to kill and are worth 100 points, Gnasker (yellow) which take six shots to kill and are worth 200 points, Tandminator (red) which take nine shots to kill and are worth 300 points, and Basker (flying) which take six hits to kill and are worth 500 points, but not seen on the radar at the bottom of the screen; if any of the bacteria touch Harald, they shall drain his energy (indicated by that red, yellow and green line above the white one at the top of the screen), and if he runs out of energy he'll lose a life. When Harald comes to a hut from which bacteria are emerging, you have to press Enter while standing in front of its doorway to destroy it - and after you destroy all of the huts on the current stage (as the bacteria, which shall damage the mouths' teeth, shall keep emerging from them if you can't, and the tooth damage is indicated by the two-figure value to the right of Harald's remaining lives increasing, which will cost him a life when it rolls over to 00), you will have to destroy any remaining bacteria on the stage to clear it (several powerups also appear for regular stages, including: additional tubes of toothpaste, extra lives, mega bombs which may be activated by pressing Space, shot upgrades, and additional energy). After a regular stage, you will receive a bonus of each bacteria type's point value for each one of them you killed, along with an energy bonus, but 100 points will be deducted from your total bonus for every tooth that the bacteria had damaged during the course of the stage.

Stages 4, 8, 12 and 16 are boss stages; in these stages, the two-figure value to the right of Harald's remaining lives is absent, and his tube of toothpaste gets swapped for a giant toothbrush, which the player must make him use to fight an enormous bacteria by pressing the joystick's button to strike it.