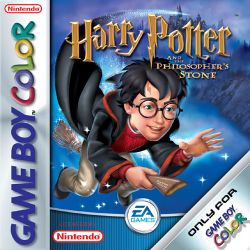 The game follows Harry Potter through his first year at Hogwarts, following most of the events of the book and the movie (though it is more faithful to the book in this regard) and includes some original sub-plots as well.

This version is that of a role-playing game. The player controls Harry in a top-down perspective, speaking to characters and discovering items to progress the story via quests. Items can be used to provide beneficial effects, while others can be equipped to increase Harry's stats.

The player will encounter a variety of enemies along the way (visible on the map screen instead of random encounters), and battle them in a traditional turn-based fashion (similar in appearance to the classic Final Fantasy games). Spells are the primary means of defeating foes, with stronger ones being learned over time. Defeating foes grants Harry experience, leveling him up and increasing his stats further.

One of the major sidequests is the collecting of Famous Witches & Wizards cards, which can either be purchased or found hidden all over the game. While fun to collect, obtaining them can also grant you special card combinations, which, if used in battle, provide a variety of effects (some highly useful, others not so much).

Another overarching sidequest is winning the House Cup - Points can be earned or deducted from Gryffindor depending on the players actions, and the winner is determined at the end of the game (the reward is well worth it). Several minigames are also featured, including side-scrolling action sequences, mastermind, and memory games. These are initially played as part of the storyline, but are unlocked from the menu afterwards to be played at any time.