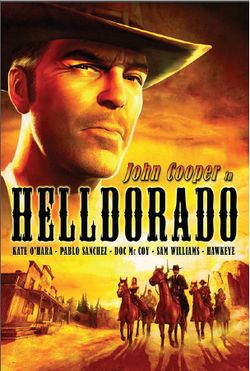 Helldorado is the third RTS western in the Desperados series of Windows games from Spellbound Entertainment. The game was released in Europe in 2007 and in 2009 in North America for retail and through Steam.

Angel Face's widow kidnaps and poisons Doc McCoy, and unless John does some "menial" tasks for her, she'll leave McCoy to die. Unfortunately, these menial tasks inevitably brand Cooper and his friends as criminals, since they involve robbing a bank and stealing a train full of U.S. Army weapons. While Cooper and his team are forced to perform the tasks, they discover that they–along with Mrs. Goodman–are mere pawns for a more dastardly plot: the Mexican revolutionary El Cortador's plan to assassinate the President of the United States!