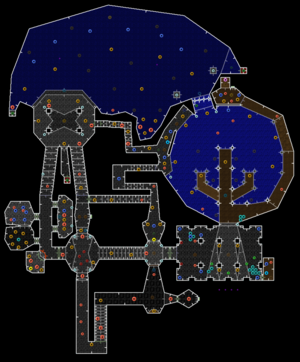 Map of the level.

When you first enter the area, head straight ahead into the courtyard ahead. You will be attacked by gargoyles that will try flying at you and attacking. Head along to the right and enter the back room. Press the switch to lower the key, and take it.

Head to the left within the starting room. Fight past the enemies as needed. When you approach the corner, take a right (or enter the secret in this region for a weapon). The side rooms here contain some ammo and health, but are unnotable otherwise.

Head to the north room, and turn to the other southern staircase. Flip the switch on the west wall to open the exit path, visible from the ledge. Proceed through the newly opened path, and head up the stairs as they raise. The exit is marked by the door containing the sigil, and is activated by pressing the sigil button.

In Heretic, there are secrets scattered throughout the map. To reach all the secrets, you must step on a sector or floor tagged as a secret. There are four secrets in this map.