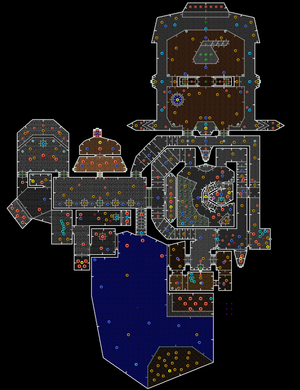 Map of the Gatehouse

The first step is to retrieve the yellow key.

Head forward across the courtyard and through the doors on the other side. Take a left turn, and continue down the corridor and rooms until you reach the end.

In the first room past the corridor, four lifts containing ammo will lower for a few seconds. Continue through the far door.

The second room has a quartz flask, but picking it up opens an ambush of gargoyles.

Past the door is a few golems. THe etheral crossbow is located in the alcove to your left, and is guarded by another golem. Entering this alcove released five golems that will attack.

Head past the barrels, and into the opposite room to get the gold key. Entering the room releases undead warriors behind you. You can also collect a Shadowsphere in the room left of the yellow key, which releases an ambush of two undead warriors. A tomb of power is also present on easy.

Once you have the yellow key, a platform in the first corridor will lower, allowing you to access the silver shield.

Return to the room with five lifts and enter the yellow door, to reveal a corridor that heads left and right. The right corridor leads to a few items, including a morph ovum.

When you head left, you will reach a tower. Flip the switch on the close wall top open the staircase to the top, where you can collect the key. You can also take the corridor on the same wall to get a bag of holding. Gauntlets of the Necromancer are also available once you reach the sixth step; the switch behind the gauntlets opens a secret area (see below).

The green key is in the top of the tower. Collect it and return to the five-lifts room either on foot or by the teleporter (which leads to the starting area.)

At the exit room, press the left switch to open the wall, then the right switch to lower the left to the exit. Press the exit switch to continue to the next map (although like other Doom engine games, you do not need to wait for the lift to raise.)

There are two secrets: