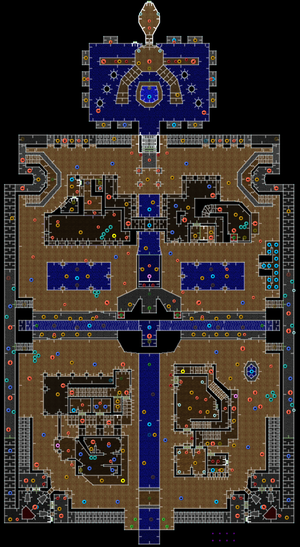 After starting on the southern edge of the map, The yellow key is located on the left building, and can be accessed by climbing the stairs on the left-hand side. There will be a large number of golems on the stairs, trying to block access. At the top of the stairs is a point where you can jump to the southern building section, allowing you to reach the yellow key.

The green key is in the eastern building, and can only be accessed once you get the yellow key.

A door leads to the southern part of the eastern building, which leads to a small staircase. The stairs lead to a green key, and also allow a running jump to a tome of power.

You also need to flip a switch found in the northern section of the eastern building. In addition, if you climb the stairs in the northern part of the building, you can reach the etheral crossbow at the end of the long corridor.

With the green key, you can head to the south-east or south west to go through the green key gate. From here, you can access the northern section by running down a long corridor. Some of the wall textures to the center may look different, and they can be opened to reveal a new path.

In the northern section, head to the center river and move to the southern part. This contains the blue key, allowing you to reach the exit.

The door will not open if you try using it directly. To the left is a switch that opens the door, allowing you to escape.

If desired, you can jump into the center pillar to collect wings of wrath. This allows you to fly and collect any other secrets on the map.

While not classified as a secret, there is a shadow sphere in the south-east building.