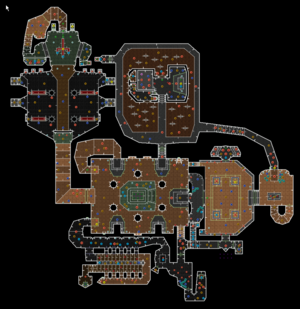 Map of The Cathedral

This map contains a few secrets, and also requires you to open doors that would otherwise be considered secret in other situations. You start in the northwest corner of the map.

The yellow key is directly behind the starting position, but is on a raised platform. To reach it, make a hard right turn, and go up the steps. Once you reach the window overlooking the cathedral, the platform below the key has lowered to the ground level. Drop directly down to grab the key.

You can now exit the church section through the yellow door.

If you want an Etheral Crossbow, flip the switch at the bottom-left, and run to the lowered lift at the norht-west corner.

Travel to the east edge of the room, and flip the switch to lower the nearby lift. Continue east, collect a bag of holding and silver shield if desired to enter a large room. This room will darken if you try moving between the pillars, but doing so allows you to collect a claw orb. Continue through the doorway.

In the next room is a door in the south-east corner, marked by a misaligned texture. Head into the spiral stairs, and jump across the altar. This allows you to access the graveyard.

There are two things to perform in the graveyard. First, approach the altar on the right to allow access to the green key. Next, open a concealed door marked by a glowing light in the south-west corner of the building. This not only brings you to a switch that raises the stairs to the green door, but to a teleport that brings you near the Tome of Power.

While not tagged as secret, you can collect the Wings of Wrath by entering the south-west alcove just past the green gate. This lets you collect items at the start of the level.