Heretic/E3M6: The Halls of Fear 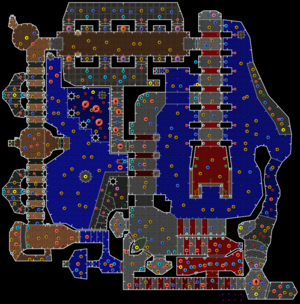 Enter the hallway to the north, but drop down to the water below. Look for a cave on the south of the eastern wall, and reach the yellow key at the end of the tunnel.

When you reach the yellow key, the wall ahead of you will lower to reveal an Iron Lich. You can evade it or fight it at your preference, although there is a dragon claw at the back of the revealed room.

Return to the starting area - the easiest route is through the teleport at the north end of the water. 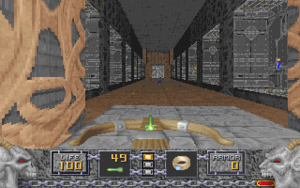 Monsters wait in the alcoves to the side.

From the starting area, run north, and turn west through they yellow key gate. This opens to a large corridor filled with weredragons and saberclaws hiding in the alcove - they will only approach if they can see you. When you are ready to cross the corridor, head to the left, and press the south switch to open the west and east doors (as well as the sub-corridors to the north and south). The north switch adjusts the starting area, making it easier to reach a secret below.

Caution: A maulotaur is somewhere behind green key door. Make sure you have room to retreat in case he is at the door.

In the middle of the west corridor, open the green key door on the right. You first need to unblock the stair by pressing the switch at the north of the watery area. Next, climb the stairs to the south to retrieve the blue key. When you reach the blue key, the water level will lower - if you fall in, you can escape using the teleporter behind the iron liches.

You can return to the starting area by heading east from the blue key. Turning north (as opposed to jumping back into the water) will open the rest of the map, so that you can explore.

The exit is behind the blue key door, at the south of the western corridor. Follow the blue-colored rooms.

Note that entering here will create another pathway to the main level, which leads to an area tagged as a secret.

Although non-official, the water area that surrounds the starting position has a secret door at the northern end of its western side. The door hides a teleporter and a Ring of Invincibility. Use the teleporter to reach the ledge on the eastern side. Collect the Hellstaff and the ammunition. (You will have to use this path if you fall into an enclosed area after the nearby bridge raises.)