Gameplay
Appendices
Walkthrough
City of the Damned
The Ossuary
Hell's Maw
The Stagnant Demesne
The Dome of D'Sparil
Deathmatch maps
File:Heretic Epi1Stage1.png
The first episode, City of Damned. This is the first view of the game in the shareware version. The name of this stage is "The Docks".

The game features numerous enemies, all of which are supernatural in origins. 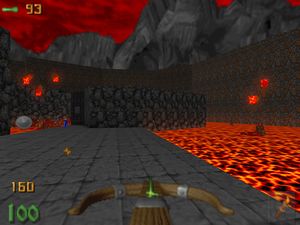 The second episode, Hell's Maw. This is the seventh stage, "The Great Hall", in front of one of the lava lakes. 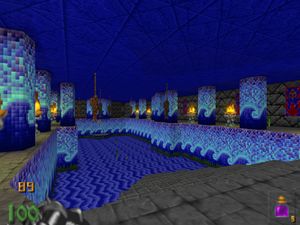 The third episode, "The Dome of D'Sparil". This is the fourth stage, "The Azure Fortress", into a water pool.

Golems and undead warriors, sometimes appear as translucent ghosts that can only be hit with magical weapons such as the gauntlets, elven wand, ethereal crossbow (center bolt), dragon claw, phoenix flames, or hellstaff. Man-made weapons, such as the staff, the side arrows of the crossbow, the phoenix projectile, or the mace balls, simply pass through. A few of the enemies reappear in Hexen: chaos serpents are separate and fairly common creatures with much fewer hitpoints, maulotaurs can be summoned by the player to attack enemies, and the dark bishops and the Heresiarch appear similar to the disciples. The Heresiarch looks much like the sorcerer displayed in Heretic's final cutscene.