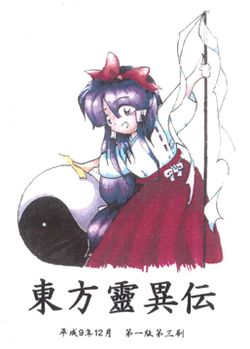 Highly Responsive to Prayers (東方靈異伝, Tōhō Reiiden?, Wondrous Eastern Legend) is the first game of the Touhou series, released in 1996. It is not a vertical top-down shooter like most other games in the series, and is similar to Arkanoid instead.

The game's creator, ZUN, was a college student at the time of completing the game. Although development concluded in 1995, the game was not displayed to the public until a Tokyo University festival in 1996. According to ZUN, Highly Responsive to Prayers was merely a "study project" before its release at Comiket, Tokyo's semiannual doujinshi fair.

Reimu Hakurei, the perpetual protagonist, was introduced in this game. Reimu Hakurei enters through the gateway into another world, intent on locating and punishing the one responsible for destroying her shrine. Players direct a yin yang orb with amulets to break away blocks and the level is over once all of them are gone. If the player runs out of time on a level, bullets will rain down until the player completes the level or dies. Bosses are defeated by hitting the orb into them until their life is fully depleted.