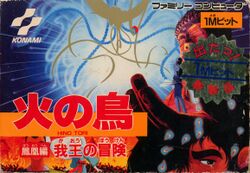 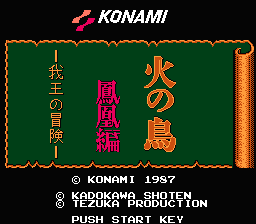 Hinotori Houou Hen: Gaou no Bouken is a side scrolling platformer developed for the Famicom and published by Konami at the start of 1987. The title is roughly translates as "Phoenix - Firebird volume: Gaou's Adventure." The game is based on the manga series by Osamu Tezuka, creator of other famous anime icons such as Astroboy. Tezuka considered Phoenix his "life's work"; it consists of 12 books, each of which tells a separate, self-contained story and takes place in a different era.

The Famicom game is based primarily upon the fifth volume of the Saga (entitled Resurrection when published in English by Viz Media,) and focuses on the character Gaou, a man who lost an arm and an eye as a baby and was treated harshly by peers and adults alike while growing up. Angry and resentful, Gaou learns that no humans will give him a chance for a happy life, so he does whatever is necessary to survive, including murder if necessary. However, he reveres nature and will go out of his way to save the smallest insect's life. Along his travels, he meets a monk who changes his perspective on life and teaches him to tap into his innate talent to carve and sculpt. His creations are unrivaled in terms of the raw emotion that they communicate. Throughout his life he crosses paths with another sculptor whose arm Gaou once slashed. They each have they own encounters with the Phoenix, whose blood grants immortality to any human that drinks it.

In the game, Gaou must travel through 16 different stages collecting an artwork card from each stage which, when fully assembled, display the picture of the Phoenix. Many stages reference scenarios from other volumes of the Phoenix saga, and take place in the future as well as in the past. Some stages are linearly connected, while other stages from other time periods can only be accessed by finding the hidden warp that leads from one stage to another. At Gaou's disposal are his chisel (which he originally used to sculpt gargoyle head statues), and the gargoyle heads which he can deposit to form makeshift platforms. The game ends when all 16 cards are collected, and the Phoenix is revealed