"Seven" is the sixteenth map on the French side of the campaign. 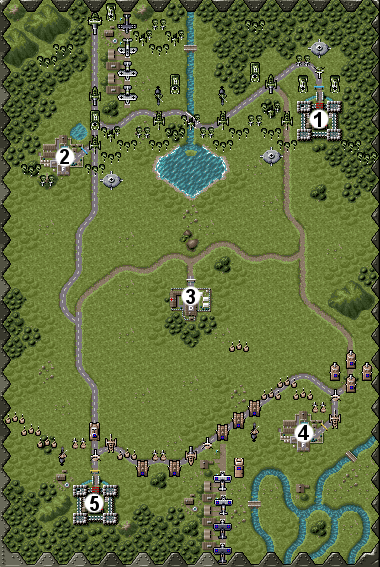 Split up your frontline into two groups: one defends the HQ, one defends the factory. The forward infantry should fall back right away. The truck should go left, because you will need it to later move the medium artillery, which should also go left. Let the enemy aircraft come to you and take them out with AA fire, elite infantry and aircraft (in that order), then repair your damaged planes. Let the factory produce more light artillery. The factory group will receive the brunt of the enemy’s offensive: be prepared to give ground, fire only with artillery at non-adjacent enemy units, keep repairing your damaged units. The offensive against your HQ group will be over relatively quickly; once the air clears, move forward and capture the depot in the center and the factory in the northwest with close air support. By that time the enemy will have run out of units, and momentum, in the factory area as well. Move in with both groups to capture the enemy HQ.