47 receives an all-expenses paid trip to Chile for a day. Sadly, it's all business and little pleasure, as a client has requested a hit on a wine trader turned drug maker. 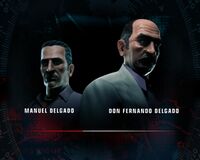 Fernando is a former colonel in Pinochet's intelligence service. Following a downturn in his wine business, Delgado secretly turned to the much more profitable cocaine industry. He's currently hosting a party to celebrate a new wine label named after B-movie action star Rex Stanton. The client wants Delgado dead and while you're at it you should take out his son Manuel, who's also in on the coke trade.

All the VIP guards patrolling the hacienda, hangar, and drug lab carry this weapon visibly.

On the Don. Usually, you'll be able to get it off his body but if you shove him out the window there's a chance he'll fall onto the rocks and the gun will be out of reach. Oh well, that's what replays are for.

Manuel has it. You should still have the one from the tutorial if you followed the walkthrough.

Also found in the tutorial. If you must have another, all the outdoor and wine cellar guards carry them.

Just the standard stuff, really. You might want a pistol to make your life easier, but none of the guns are essential. 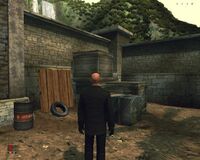 Climb up these crates to reach the estate.

At the start, go through the double doors ahead. Head to the right and open the door in the corner, where a lone dock worker is standing. Climb up the stack of crates and hop over the wall. Wait until the guard in the suit up ahead enters the estate, and then climb up the pipe that leads to a balcony (careful of the nearby sleeping guard). Open the double doors and head through the door on the left. Go down the stairs and use your lockpick on the door. Step inside and take the VIP guard suit.

At the beginning of the mission, head West directly. There is a single guard patrolling this area, so sedate him and steal his suit. Climb on top of the roof using the abandoned pick-up truck near the facade. You can enter the court of the mansion through a hole in the roof where the barrels are stocked. When you get out of the small warehouse, turn left immediately and then follow the wall until you reach the corner. There you will find a pipe leading to another section of the roof. On this new section of the roof you will find your passage into the building via an open window with direct access to the Don's private room. 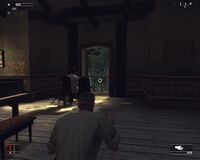 Throw a coin onto the balcony and then push Don Fernando off when he investigates the noise.

Dash up the stairs into the small study. Open the door and walk to the other end of the hall. When the patrolling guard and the stationary guard both have their attention elsewhere, pick the lock on either door. This is tricky and requires exact timing.

You are now inside the Don's inner sanctum. You now have two ways to execute your mission:

If you followed the alternative route

Exit the estate by going through its front doors on the first floor. Head through the set of double doors on the left, which brings you back to the party area. Open the double doors near the buffet table, which lead to the wine cellar.

You can plant the bomb on this winch...

There are two ways to "accident" Manuel, both of which will probably require lots of restarting. The convoluted method involves a lift with several barrels on it, which Manuel will stand under for a good ten seconds. The problem is that the bomb itself has to be planted on the winch, which means that when you blow it, a nearby guard will probably die in the explosion, and while squishing Manuel with the crate will count as accidental, blowing up the guard will count as a kill.

None of the ways of getting this guy to move are flawless--when he goes to check the bottom of the stairs, Manuel usually isn't in place; if you shove him over the railing, the guards may get suspicious; if you take him hostage, you need to get all the way down the stairs and into the coke room to hide the body. If you must try this method, shove the guard and immediately blow the mine; the explosion should attract more attention, but not always.

...and then detonate it once Manuel stands under the barrels.

The simple but inconsistent method is just that--when Manuel comes into the cellar, shove him down the first flight of stairs. Depending on what platform you're playing the game on, this could be difficult as the game's physics engine is very different on PC, PS2, and Xbox. This is probably the way to go, as it's less dependent on the movement of the guard, though you should probably wait until he's not looking.

A more up-close-and-personal method involves waiting until Manuel is done showing his friend around the drug lab. When Manuel goes into the small room with the coke and shotgun shells, wait until he walks past the stack of barrels and then use your poison syringe. You must do this quickly and away from the two guards outside. If you don't kill him inside that room, it's still possible to kill him before he goes up the staircase; however, be sure the guard at the top or the tour group don't see you kill him. This doesn't really save you much effort over the bomb or the stairway, but its there if you want to try something different. 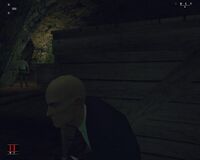 Hide behind this crate, throw a coin to the right to distract the nearby guard, and then run to the other side of the dock.

After you kill Manuel, head back to the room in the estate where you left your suit (the one with the sleeping guard). Look through the keyhole of the door on the right and wait until the patrolling guard has his back turned. Once he does, sneak behind him until you get to the area with the staircases. Make sure you're standing very close to the right-hand staircase and wait until the guard passes you. Go down the hallway and through the door at the very end, and then through the door in front of that one.

Head outside and climb up the pipe that's to the left. Before getting off of the pipe, make sure the guard on the other side has his back turned. When you're on the roof, jump off to the right (making sure the guard at the bottom doesn't see you), and then go down the entire cliff path that's on the right side.

When you get to the bottom, go past the dock worker having a cigarette and quickly and quietly hide behind the crate that's behind the VIP guard. Throw a coin to the right to distract him, and quickly go to the other side of the dock where the seaplane is (try not to run until you get close to the other side). Board the seaplane to end the mission.

If you want to try something more risky, bring along your W2000 Sniper Rifle. First, climb the pipe that leads to the hacienda, go into the adjacent room, and assemble your rifle. If you did this fast enough, Manuel should be outside next to the entrance to the winery. Line up your shot and fire. Disassemble your rifle and and walk down the hallway. Enter the second door on your left, close the door, reassemble your rifle and place it in the ICA container. Take care of Don Fernando and escape.

This strategy is risky because if you remain on the balcony too long, a civilian or guard might see you, forcing you to restart.

This method allows you to complete Silent Assassin in two to three minutes.