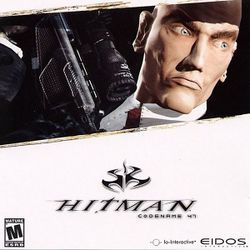 Hitman: Codename 47 is the first game in the Hitman video game series. It was released in 2000 and focused on stealth-oriented gameplay. However, there are many ways to complete missions, so players are not discouraged from not focusing solely on stealth. In addition to taking out individual targets, the player may have to complete certain objectives, such as retrieving an item or escorting other characters. The game also featured ragdoll physics, which was a unique feature at the time. Codename 47 is followed by Hitman 2: Silent Assassin, which was released in 2002.

The game begins with a scene showing 47 waking up and being ordered, by a mysterious voice, to perform various tasks, such as changing clothes and using weaponry. This serves as the training level. At the end, 47 kills a guard and takes his clothes in order to escape. The man behind the voice sees this, sits back, and laughs.

One year later, Hitman begins his missions for the Agency. His four major targets are:

With the exception of Franz Fuchs, there are one or more prelude missions that lead up to the actual hit.