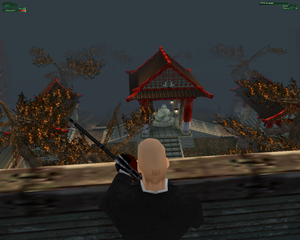 The vantage point from the northern roof; other roofs are also accessible.

Run towards the end of the street heading from behind your car. Pass the locked double gates and run a few hundred yards down the road (in the same heading), until you see an alley on your right. Go through it and run straight past the park, then at your first chance turn left. Run down the road, then turn right up an alley. Then enter the lift and press the button inside to reach the roof.

After the assassination, a helicopter is dispatched. After the cutscene for it stops, you may either take aim at the gunner, or run to the elevator to evade the helicopter. The helicopter gunner will fall to practically a single hit. In either case, pack up the R93 and return to the car.