The Jagdwaffen R93 sniper rifle is featured in many levels but are only used by 47. It is very accurate when fired from the sneak posittion. If the sniper gets a head shot, it kills the target. Body and limb shots take two bullets but upper body only requires one.

The weapon is stored in a sniper care for easy concealment, and is quickly assembled.

The WA2000 appears only in the Rotterdam levels and is only used by 47. It is very handy in Plutonium Runs Loose. With it you can kill all the guards plus it is silenced but lacks the case of the R93. It is equally as accurate.

The AK-47 features in four levels, The Lee Hong Assassination and the three levels set in Colombia.

The AK-47 in Lee Hong it is favoured by the Red Dragon members. It is also favoured by Pablo's drug soldiers. The AK-47 is quite accurate at short to medium ranges when in fully automatic firing mode. It is quite accurate at medium to long range when in single shot. If firing fully auto at long distances, most of the clip is used to kill one man. But it is good in room to room fighting like in The Lee Hong Assassination. 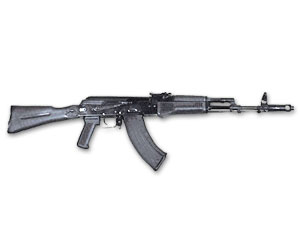 The AK-103 features only in the levels set in Colombia. Pablo's guards dressed in sandy coloured uniforms and the guards in green with caps on have them. Its firing characteristics are roughly the same as the AK-47, but it is more accurate in fully auto. 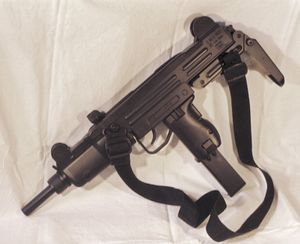 The Uzi features on the levels set in Hong Kong, but like the other weapons, 47 can equip it using the ICA Weapons page.

It is favoured by the Red Dragon members and Lee Hong's bodyguards. Its accuracy is about the same as the AK-47, and probably a little more accurate at close range. But it lacks the power or the AK, so the AK-47 and AK-103 are better. The only advantage it has is that it is concealable.

The MP5 like the other weapons gave be given to 47 via the weapons page.

Its closest comparison is the Uzi, as they are roughly the same in everything. It is also concealable.

This weapon is 47's weapon of choice and features in all the Hitman games, but in the later versions is called the Silverballer.

It is equippable in most, if not every, level and is very strong. It is loud, but it is also very accurate. Tzun carries it in The Lee Hong Assassination. Its closest comparison will be the Desert Eagle.

This is a very powerful and reasonably accurate weapon, closely compared with the Hardballer. It is quite accurate, so it makes a good, if not loud, show stopper as Ort-Meyers says. Only use it when no guards are near, unless you want a gun fight.

This pistol is a very good gun. Unlike the others, it has a 15 round clip but it is weaker than the other pistols, so it needs the extra round. If you are looking to follow a subtle appraoch, the SD version is the best handgun on the game and can, with one clip, kill three to four men comfortably, if the firer is a good shot.

This gun is very loud and very powerful. It is great for killing the Mr. 48s in Meet Your Brother. The Mossberg is much the same.

This is much like the fiber wire, only it kills quicker. If you are killing a civilian, go from the front or back. If the man is armed, slit his throat, but make sure you are in sneak mode to pull it out when behind your intended target.

This weapon is synonymous with 47. It is a stealth way of killing and does not set off metal detectors.

These are the best weapons you posses. It can be fatal to a mission if you don't remain silent, and you use your wit to make quick and decisive decisions.