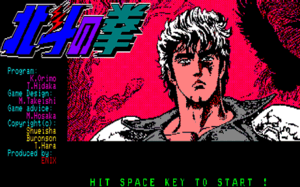 Hokuto no Ken: Violence Gekiga Adventure is navigated almost entirely through menus, with the exception of battles, which are made up of limited action sequences. There are some scenes in the game, and a good amount of dialogue; these can be advanced with Space.

When exploring, options in the menu (located to the side of the screen showing Kenshiro and Bat's location) are labeled with numbers. These numbers represent the corresponding number on the keyboard, making for easy selection. Sometimes, the options will be followed by more options, depending on the context. The nine basic options are as follows: 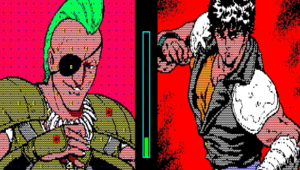 The first battle of the game, against an original character.

Battles are entered when an enemy is stricken, and have three components to them: pressure points, timing, and dodging. The available pressure points on an enemy are represented by dots all over their body. It is your job, through investigation, to figure out which pressure points lead to the death of that enemy. If you select the wrong pressure points, you have to start the battle over. You can select these pressure points using two or three fists (depending on how many pressure points must be hit) which you can navigate over the enemy using the directional keys ( ↑ ,  ↓ , ←, →) before using Space to strike.

While seeking out the enemy's pressure points, you must also dodge their attacks (represented by fists that follow yours) and hit the pressure points before time runs out (represented by the meter between the enemy and Kenshiro). Failure to do so will also result in a do-over. However, if you manage to handle all three components successfully, Kenshiro will perform a Hokuto Shinken technique that causes the enemy to explode from the inside, killing them and allowing him to continue.