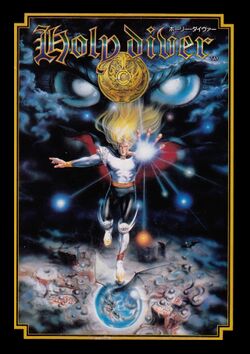 Holy Diver (ホーリーダイバー, Holy Diver?) is an action platformer, similar to Konami's Castlevania, developed by Irem and was released in Japan on the Famicom in 1989. Much of the game was inspired by heavy metal music, such as borrowing the name of Ronnie Dio's single and LP Holy Diver and the protagonist being named after Randy Rhodes, of Quiet Riot. It is considered a brutally difficult game, among the hardest NES games to beat, at times requiring tremendous memorization of stage layouts and timing in order to ensure the best chances of survival upon reaching a boss.

The game’s protagonist, Randy, is a hero who must persevere through six stages of various settings, including cliffs, a castle, lava cave, ice cave and what could be the inside of a living creature, as in the Contra games. His task is to seek out the five emblem seals of the King Crimson family in order to destroy the evil Black Slayer.

Holy Diver features a wide array of unique enemies, ranging from demons to dragons to golems. The level bosses are huge and require using all of Randy’s magical powers and abilities. Randy has the ability to shoot holy fire blasts from his hands. Each defeated boss drops a power-up; Blizzard Magic, Breaker Magic, Overdrive Magic, Thunder Magic and the Cape of Protection. In later stages of the game, he also obtains the ability to transform into a dragon and fly through the sky blasting enemies.

The game was scheduled for a North American release in the same year, and even received a brief preview in Electronic Gaming Monthly. However, the game was never released outside Japan. Since release, the game has gone onto becoming a rare game that is sought after by collectors. In 2018, 29 years after the game was first released, distributor Retro-bit announced that they would give Holy Diver a worldwide physical re-release for the Nintendo Entertainment System, marking the first time it was released outside of Japan for an English audience. The new edition was limited to 2,900 copies. The collector's edition of the game included a display box to house the game, pins, stickers, and artwork.

The 16th Crimson Emperor Ronnie 4th entrusted his two infant sons, Randy and Zack, to his faithful servant Ozzy. The three escaped the forces from another dimension in the hope to bring light back into the world.

The next 17 years were difficult but Randy, Zack, and Ozzy devoted themselves to the cause of Holy Magic Justice. The Black Slayer had further extended his empire over the countryside and the interdimensional forces were even more powerful. Randy needed to find the Royal Coat Of Arms of the Crimson to battle the demons. He set out alone to carry out the will of his surrogate father Ozzy who had passed away. Thus begins the Legend Of The Holy Magic King’s Justice.