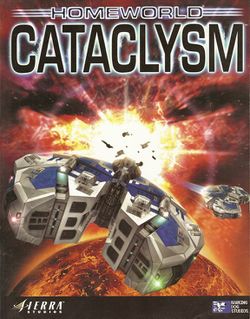 Homeworld: Cataclysm is a stand-alone expansion of the game Homeworld. Barking Dog Studios used the original game's engine (Homeworld was developed by Relic Entertainment), and many of the original models and other material from Homeworld. However, they did make a number of changes to the underlying gameplay, many of which Relic kept in the eventual sequel, Homeworld 2. The resource system was simplified (eliminating fuel) and the number of available ships was reduced, but the options for using and upgrading the remaining (and new) ships were greatly expanded.