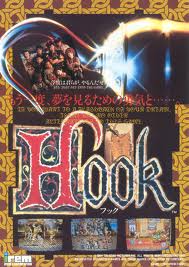 This is one of four games named "Hook." For the others, see Category:Peter Pan.

Hook is an arcade beat 'em up game developed and produced by a Japanese game company Irem. The objective of the game is to save Peter Pan's children from the evil Captain Hook. The players can choose to play as Pan or as one of the four Lost Boys. There are five playable characters, but only up to 4 players can play at the same time.