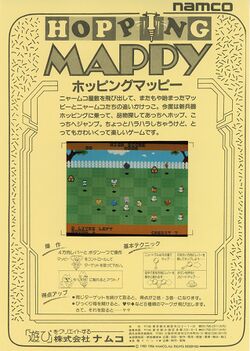 Hopping Mappy is an arcade game that was released by Namco in 1986. It runs on the company's System 86 hardware, and as the name suggests, it is the sequel to Mappy - which was released three years earlier. It is also the first game from Namco that allowed scores not ending in "0" - the others are Bakutotsu Kijūtei, Metal Hawk, Golly! Ghost!, Bubble Trouble: Golly! Ghost! 2, Cosmo Gang: The Puzzle and Emeraldia. Phelios, which is the same age as the second and third of these games, also gives the illusion of allowing these types of scores, but the smallest point value it can award to the players for killing an enemy is 10.

The game brings back the characters from Mappy but it is not as effective; the reason for this is most likely because the player does not get any new weapons after each bonus round. The rounds do not get any more confusing because the cats move in preset patterns - and the main strategy that is used to get past them, is comprised of a difficult way to more or less stand still. There are a total of thirty-one distinct rounds that the player can continue through even if he runs out of lives (if set up to do so).