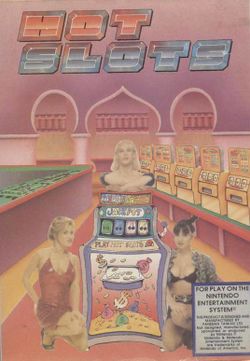 To begin a game, the player chooses one of three slot machines: Cutie Bunny, Juicy Fruits, or Las Vegas. Each machine has a distinct visual design and musical score. After purchasing "medallions" (token coins), the player may play up to five medallions in a machine for each pull. The player stops each reel by pressing a direction on the D-pad. Between spins, the player can optionally switch to another machine.

Hot Slots is an eroge, a video game that rewards game progress, persistence, or performance with images that are sexually explicit or suggestive. Each slot machine is accompanied by a scantily-clad hostess, who appears at intervals when the player's winnings surpass a certain threshold. When the player nets a profit of $210, the game displays a full-screen cartoon image of the partially clothed hostess with a caption or speech balloon. At a net profit of $300, she loses more of her clothing; at $450, she appears nude.