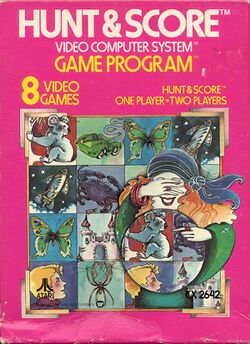 Hunt & Score was one of the eleven Atari 2600 titles that were part of the second wave of games released in 1978. It is based entirely around the card game commonly known Concentration, in which a player turns over two face down cards with the hopes of finding a matching pair. It is one of the first games to utilize the Atari Keypad controller.

This game was released as Memory Match under the Sears Telegames label. In 1980, Atari retitled the game as A Game of Concentration, in order to capture its gameplay and presumably to boost sales of the cartridge.

Every square in play has a number associated with it. All numbers are shown on top of the card, one column at a time. Each player must enter two numbers as guesses which indicate the card that they would like to turn over. In a one player game, the player enters their two guesses every turn, whereas in a two player game, each player takes turns entering their two guesses.

When the two guesses are entered, the face side of each card is shown. If the cards match (or, if wild cards are in play and one of the cards turned was a wild card,) a sound indicates that a match was made and player receives two points (or one point if the difficulty switch is set to "a"). Then the two selected cards will be removed from the table, and the successful player will receive another turn. If the cards did not match, a different sound is made to indicate failure, and the cards are returned to the table face-down. In a two player game, it will become the next player's turn. In a single player game, a wrong guess will be tallied.

Hunt & Score can be played in eight different ways, based on three different distinctions: