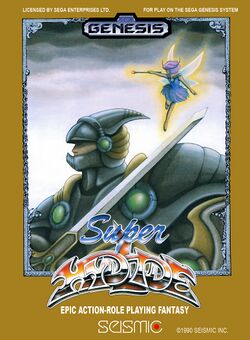 Hydlide 3: The Space Memories (ハイドライド３ 異次元の思い出, Haidoraido 3: I Jigen no Omoide?) is an action Role-Playing Game developed by Hydlide series veterans T&E Soft and originally released in 1987 for the MSX, MSX2, and NEC PC-88. All these version were available in Japan only.

A slightly simplified port was released for the Nintendo Famicom with a different subtitle: Hydlide 3: Visitors from the Dark (ハイドライド3 闇からの訪問者, Haidoraido 3: Yami Kara no Hōmonsha?). This version, too, was Japanese-only.

Instead, Super Hydlide is the only port that was translated for the North American and European markets. It was released on the Sega Mega Drive (known as Genesis in the United States) in October 1989 in Japan, early 1990 in the United States, and 1991 in Europe. This remake evidences substantial graphical upgrades to the original Hydlide 3, though the gameplay remains largely identical. Before its release, it was called Hollo Fighter in some Sega advertising material and was one of the first third party published titles to be released in the United States (the other being Air Diver).

Another version of the game, titled Hydlide 3 Special Version, was released for the NEC PC-98 and the Sharp X68000. This port contained new visual scenes, new areas, and new characters.

The game uses cut scenes for its opening and ending sequences, a combat system similar to Ys, a choice between four distinct character classes, and a wide variety of equipment and spells.

The game incorporates a 'good/evil character' morality/alignment system. Like its predecessor Hydlide II: Shine of Darkness (1985), the player has a morality meter that can be aligned with either Justice, Normal, or Evil. The game has both evil monsters and good characters wanderering the wilderness. Evil monsters attack the player character on sight, while good characters only attack if the hero attacks them first. Killing any enemy, good or evil, results in a reward of experience points, money, and occasionally a piece of equipment. However, if the player kills a good character, points are lost from a statistic called "Moral Fiber" (MF). If this attribute drops to zero, frequent traps will appear across the world. If the player manages to keep it over 100, rewards appear in the form of random items found around Fairyland. Unlike Hydlide II, however, the morality meter no longer affects the way in which the townsfolk react to the player.

The game also features an in-game clock setting day-night cycles, where the character must eat two times a day and sleep regularly. If the character stays up late or fails to eat regularly, his health and attack power gradually drop.

Every item in the game, including money, has weight. If the total weight of items the player character carries exceeds his "Load Capacity" (LC), he will move slowly.

Many years after the events of Hydlide II, an explosion of flames appeared near the City of the Woods. After that, enemies were everywhere. A young man is chosen to find the source of the evil.