From StrategyWiki, the video game walkthrough and strategy guide wiki
(Redirected from Hyper Olympic '84)
Jump to navigation Jump to search 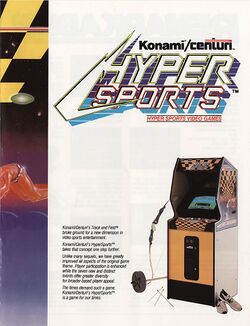 This time, there are seven events to compete in; Freestyle swimming, Skeet Shooting, Long Horse, Archery, Triple Jump, Weight Lifting, and Pole Vault. Due to the collection of events, Hyper Sports is not as Decathlon-based as its predecessor. Instead, it tries to have a more well rounded feeling. However, that well roundedness contributes to the lack of cohesion that ties all of the events together. Since the events have little in common, the control scheme continues to change and becomes less intuitive than the events found in Track & Field.

Hyper Sports was ported to a few systems, primarily Japanese. It did not receive the same level of popularity in the United States as Track & Field did, and the video game market had crashed in America, so Hyper Sports is far less represented on popular American systems like Atari's. The MSX conversion was actually spread out across three volumes, introducing extra events to the title. The NES conversion only contained three of the Hyper Sports events: Skeet Shooting, Archery, and Triple Jump, as well as the High Jump event found in the arcade version of Hyper Olympic. These four events were combined with the original four events in the Famicom version of Hyper Olympic to create the US version of Track & Field for the NES. 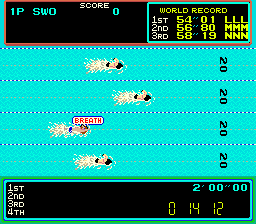 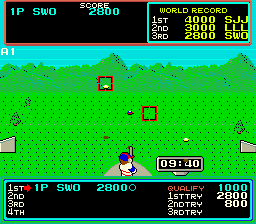 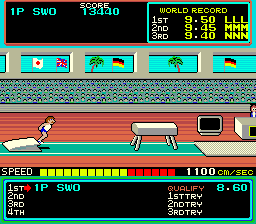 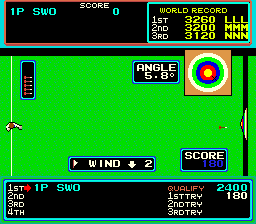 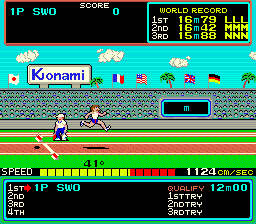 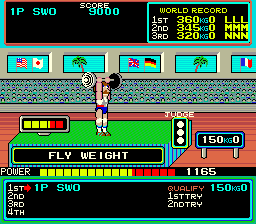 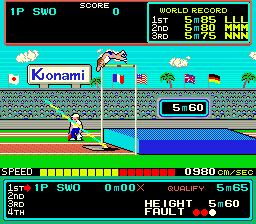 The Commodore 64 version is the only home conversion that is accurate to the arcade version. The other home conversions done by Konami and released in Japan differ from the arcade release to various degrees. The MSX conversions are released across three volumes, the first of which only includes the long horse from the arcade game. The other events are High Dive, Horizontal Bar, and Trampoline. These four events are also the only events present in the Sega SG-1000 version. The Famicom version only contains the Freestyle Swimming, Archery, and Skeet Shooting events, along with the High Jump from the arcade version of Hyper Olympic. The Hyper Shot controller that Konami released for the Famicom was also available for use with Hyper Sport.

Unlike the arcade, the Commodore 64 controller doesn't support pressing left and right. However, instead of pushing up on the joystick, you will press fire. There is only one life in this game, and failing to qualify returns you to the title screen.

The qualifying times and changes apply:

Hyper Sports has been released on many different systems, and has accumulated a wide range of box artwork, some of which is displayed below.