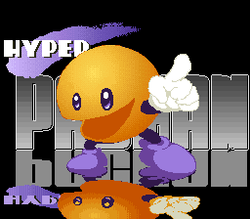 Hyper Pac-Man is an arcade game that was released by SemiCom on September 5, 1995; it runs on the hardware first used by Toaplan for Snow Bros.: Nick and Tom in 1990 but increases the speed of the Motorola 68000 to 16 MHz and reduces the Zilog Z80 to 4 MHz (it also uses a Yamaha YM-2151 which had previously been used in the official Pac-Man title Pac-Mania, in 1987, and OKI MSM-6295 for sound instead of a Yamaha YM-3812). As its name suggests, it is based upon Namco's Pac-Man series, but isn't officially part of it - and it introduces two-player simultaneous play (the second player controls a pink Pac-Man with a red headband), winged sneakers that allow the Pac-Mans to jump up over the ghosts (who are not named, and only come in blue and pink), when eaten, bombs that blow up certain parts of the mazes to reveal hidden items when eaten, sunglasses that reveal the position of these hidden items in the walls when eaten, rollerskates that increase the Pac-Mans' speed when eaten and laser helmets which allow the Pac-Mans to fire shots at the ghosts when collected. Power pellets shall also turn the ghosts white when eaten, given that one of the two colours they come in is blue; there is also a time limit for each stage (possibly to prevent players from point-leeching, after a laser helmet has gotten collected), and the tenth, twentieth, and thirtieth stages also feature bosses. The boss for the tenth stage is an enormous mechanical bull, while the one of the twentieth stage is an enormous mechanical squid, and the one for the thirtieth stage is an enormous mechanical "evil" Pac-Man, with three forms; both Pac-Mans will also always have laser helmets with unlimited shots.

In 1997, SemiCom rereleased this game as part of their compilation arcade game, XESS: The New Revolution (under the name Hyper Man); the third and final form of the enormous mechanical "evil" Pac-Man on the thirtieth stage was removed in this version. SemiCom's first game, Cookie and Bibi (also 1995) was also rereleased as part of this compilation - but its third (and final) title, New Hyper Man (a multi-directional shooter which also starred Pac-Man) was an entirely new game altogether.