From StrategyWiki, the video game walkthrough and strategy guide wiki
Jump to navigation Jump to search
I, Robot | Table of Contents | Gameplay | Walkthrough 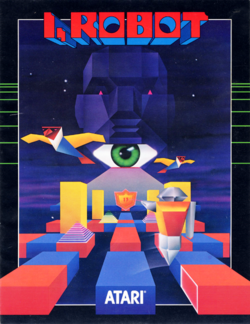 I, Robot is an arcade game that was released by Atari in 1983; it runs on its own dedicated hardware (a Motorola M6809, running at 1.5 MHz, with four Atari Pokey sound chips running at 1.25 MHz), was the first game to feature filled 3D polygonal graphics, and is in no way related to Isaac Asimov's book or The Alan Parsons Project's album of the same name (and, it was not the basis for that 2004 movie starring Will Smith, either). It was designed by David Theurer, who had previously designed Tempest.

The player must take control of "Unhappy Interface Robot #1984", a "servant" robot who has become self-aware, and questions his totalitarian society, which is ruled over by the sadistic "Big Brother"; the object of the game is to destroy the gigantic, blinking eye of Big Brother that watches over each level, and in order to do this, the robot must move over the red squares which cover the playfield, which will turn them blue and weaken the shield that protects the eye. However, one of the arbitrary laws of "Big Brother" is 'no jumping' - and if the eye is fully open while the robot is in the act of jumping, it will fire a laser at the robot and destroy him. Each level has a strict time limit, and other enemies such as birds, balls, and flying sharks will try to prevent the robot from completing his task; between levels, the robot flies through outer space, and must shoot his way through a barrage of polygonal tetras, meteors and other obstacles (including, after each fourth level, a huge spike-spitting head) to reach the next board.