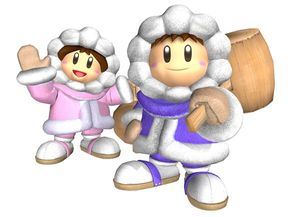 Press to jump into the air. If a breakable ice block is one level above the climber's head, he or she will chip way at it with their hammer.

Press to slam your hammer down on the ground.

Pauses the action in the game.

Not used during game play.

You control one of the Ice Climbers. Player 1 controls the blue male Ice Climber Popo, and player 2 controls the pink female Ice Climber Nana. The climbers' goal is to rise eight stories on each frozen mountain to reach the bonus round near the peak. In the bonus round, they earn the chance to collect the vegetables that were stolen from them by the mountain condor. The wield a hammer that they use to chip away at the ice in the ceiling over their heads, and to smash away any enemies that try to stop them. Popo and Nana have exceptional vertical leaps, but their lateral jump isn't quite as good. In fact, it can be a source of frustration until you get used to it. From a stand still, they barely jump forward a few blocks. To jump horizontally by an appreciable distance, you will need a running start. The Ice Climbers lose one life every time they collide with an enemy or an icicle, or when they fall off the bottom of the screen when they are not yet in a bonus round.

In the Japanese version of Ice Climbers, these enemies are seals, while outside of Japan, they are represented by miniature abominable snowmen. Their behavior is the same. They are not actually interested in attacking the climbers directly, but they will kill the climbers if they get in the way. What they are interested in is completing the pathway from one side of the mountain to the other. They will traverse a floor until they come across a gap. If they encounter one, they will double back and reappear on the screen with a new piece of ice. If they succeed at pushing the ice to the gap, the ice will plug the gap and the topi will continue on until it encounters another gap and repeats the cycle. One smack of a hammer to the head sends it reeling.

Nitpickers are another nuisance that gets in your way as you climb to the top of the mountain. They come out one at a time and fly around in lazy circles across the screen. They fly on a predetermined path, and will not deviate from it no matter how close the climbers get. So all you must do is steer clear of the Nitpicker's path.

The sunglass wearing, pink speedo bearing polar bear that graces the cover art of the game is actually a rare sight in the game. In order to see him, you must not advance the height of the mountain for a very long time. If the camera remains focused on a particular set of levels for too long, the polar bear struts on to the scene from the left, and walks across the screen. When he is roughly half way across, he will jump up and down, and the force of his weight will cause the screen to automatically scroll up. If you are on the bottom level when this happens, you will lose one life.

The Condor is the Ice Climbers' ultimate nemesis. He is the one that stole the climbers' vegetables and carried them up to the top of the mountain. He flies above every mountain peak. If you manage to complete the bonus round in under 40 seconds, and make it to the very top of the mountain, jump up and try to wind up between the Condor's claws to receive a large completion bonus before moving on to the next mountain.

Only present in the arcade version, Vs. Ice Climber, Bees appear from one side of the screen at whatever level a player happens to be, and flies straight across. Nitpickers will not appear when a Bee is present and vice versa. Other than jumping over them, you only defense is to swat them with your mallet. Unfortunately, you won't be awarded any points for defeating them. Note: In the Famicom Disk System version of the game, Bees are replaced by Nitpickers which fly straight across. 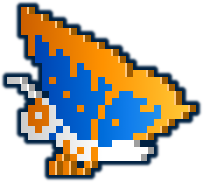 Also only found in the arcade version, Vs. Ice Climber, Butterflies take the place of the Condor in the second set, or back side, of mountain stages. Aside from having a unique appearance, its behavior is exactly the same as that of the Condor's, and you must jump up to grab the Butterfly's legs in order to properly clear the mountain. Note: In the Famicom Disk System version of the game, the Butterfly is replaced by a blue Condor.