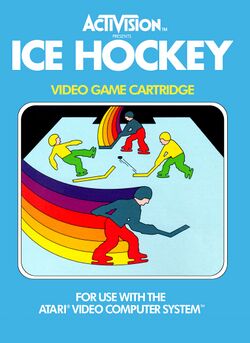 Ice Hockey is a game of two-on-two ice hockey designed by Activision programmer Alan Miller, and published by Activision for the Atari 2600. One player on each team is the goalie, and the other plays offensive (although, the goalie is not confined to the goal). As in the real sport, the object of the game is to take control of the puck and shoot it into the opposing goal to score points.

When the puck is in player control, it moves left and right along the blade of the hockey stick. The puck can be shot at any of 32 angles, depending on the position of the puck when it's shot. Human players take control of the skater in control of (or closest to) the puck. The puck can be stolen from its holder; shots can also be blocked by the blade of the hockey stick.

In July 2010, Ice Hockey was made available on Microsoft's Game Room service for its Xbox 360 console and for Games for Windows Live.