Ice Hockey is a 1988 game published and developed by Nintendo based on the sport of the same name. It was originally released in Japan for the Famicom Disk System, and was later released in North America and in some PAL regions for the NES. It was later re-released for the Wii's Virtual Console service in Japan, North America, and some PAL regions.

The play and mechanics of Ice Hockey are mostly similar to that of ice hockey in real life. The arena is similarly designed to a real-world ice hockey rink, coated in ice, with a goal on either side. The objective for both team is to hit a black puck with a hockey stick that each player carries into the opponent's goal. Each game is made up of three periods, with the victory going to the team who has the most points at the end of the game.

Teams are made up of five players including the goaltender, as opposed to six in real life. Teams are composed of different combinations of light, medium, and heavy skaters. If two opposing players fight for the puck for a certain amount of time, other players join into the fight, resulting in the player from the losing team in the fight to be put in the penalty box for a period of time.

Rules of the game[edit] 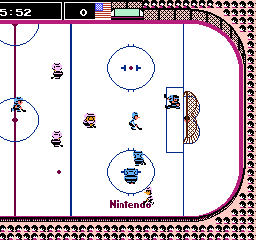 The object of the game is to shoot the puck into the opposing team's goal more often than your opponent can shoot the puck into your own goal. Each game is composed of three periods, the lengths of which are determined by the amount of time that was selected when teams were chosen. After the first period, the teams simply switch sides. After the second period, a small intermission featuring Zamboni machines is shown before the teams will switch sides again. If the teams are tied by the end of the third period, the game goes into an extra two minute period of overtime. If the players are still tied after the extra period, the game goes into a shootout, where each member from both teams goes one on one against the goaltender in an attempt to slip more pucks into the goal. If this also results in a draw, the game repeats the pattern of extra period and shootout until one player comes out ahead.

If a players shoots the puck from their zone all the way into the opposing team's zone, crossing the center line(red line) and the opposite team's goal line in the process, and it is collected by a member of the opposite team, the shooter will be called for "Icing". The referee will collect the puck, and a face-off will occur back in the original zone that the puck was shot from.

If two players fight over possession of the puck long enough, a brawl may break out between members of both teams. The "winner" of the fight will be the player who tapped

Each team is composed of five members; the goaltender and four skaters. The four skaters may be composed of any combination of Light, Medium, and Heavy players. The differences between these types are described below.

When you select a team, either for a player or for the computer, the default lineup for each country's team is presented. Players may then tailor the team's lineup to their liking, but the computer will stick with the default. The following table indicates the default lineup for each team. (Note that in the original Japanese version for the Famicom Disk System, the first two teams are Japan and USA. When converted for play outside of Japan, these two teams were changed to USA and Sweden respectively.) 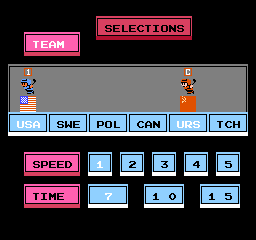 Once a new game begins, each player must select the team they wish to play as. If a one-player games is starting, the player must also select the computer-controlled team to play against. Aside from the default lineup that the computer chooses for each team, no team has any inherent strength or weakness over another team. Team selection is primarily for the sake of identifying which color your team is wearing, and to help you distinguish your teammates from your competitors.

After you select which teams to play as, you must also choose two more options. The first is how fast the players are (ranging from a 1, the slowest, to a 5, the fastest). The faster the action, the more difficult it can be to keep control of the puck, or predict where your goaltender needs to be in order to block a shot. The second options is how long each period should last. The options for period length are 7, 10, and 15. While these numbers are meant to represent minutes, the timer in the game counts down much faster than in real life. 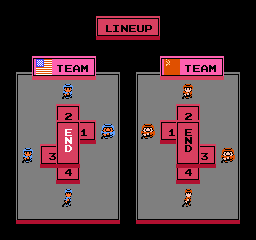 After both teams have been chosen, each player will have the opportunity to alter their player lineup to their liking. There are four positions on each team, excluding the goaltender. They can all be filled by one of three types of players: light, normal, or heavy. The differences between each player type will be described below. To change a particular player, push the direction pad to the number of the player you wish to change (for example, to change player 2, push

to cycle through the three available player types. The specific arrangement of where each player type is positioned is not very important, since you can rearrange your team to your liking in the face-off huddle. When a player is happy with their lineup, highlight "END" in the center and press

to start the game. 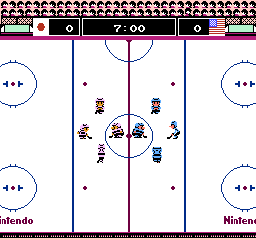 Once all players have made their selection, the game will begin. It starts with a face-off. Face-offs also occur after every goal, at the start of each new period, or after penalties are called for Icing or getting into fights that have to be broken up. Before a face-off begins, both teams will assemble in a huddle. This is your opportunity to rearrange your team using the direction pad or buttons (see Controls above) so that you can select which member of your team will compete in the face-off for the puck. Once the referee blows the whistle and appears on the ice, you cannot make any more adjustments. The two opposing players who are closest to each other will participate in the face-off. Once the puck is dropped, players compete to press

the fastest and gain control over the puck. Use the control pad to help guide the direction that the puck is sent if you succeed in slapping the puck before your opponent.

On the title screen, press and hold

on both the first and second control pad, and press

on the first control pad to remove the goaltenders from play.

On the team select screen, highlight the team you wish to control. Then press and hold

on both the first and second control pad, and press

on the first control pad to cause the puck to continue moving until it is brought under control by a player or a goal is scored. If the puck becomes airborne, it will continue to fly around the rink until it touches someone to bring it to ice level or enters the net for a goal.