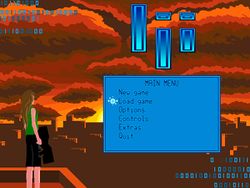 Iji is a freeware game, created by Daniel Remar using the game development program, Game Maker. Released in September of 2008, it has been described by Remar as System Shock 2 in 2D.

Players control Iji Kataiser, an ordinary human female who has been enhanced with nanotechnology following the invasion of Earth by an alien species known as the Tasen, who themselves turn out to be running from their relatives, the Komato. Iji must navigate a research station while being guided by her brother Dan, who communicates via the station's loudspeaker system, in order to convince the aliens' leader to retreat from the planet.