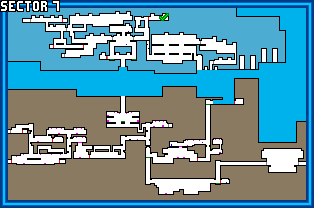 A ship in low orbit has a Phantom Hammer, capable of destroying a planetary shield generator. You need to take it out of commission.

Go forward and down.

There are two routes, both of which have Komato. The upper route has a nano field that boots your abilities, while the lower route is slightly safer.

Go into the shaft, climb to the middle floor, and jump through the glass. Go to the right, either by the top path (safer) or bottom path, and climb up and go along the route.

The armory is to the left. Collect what you can, and enter the ship. YOu first need to open the security door at the top of the entrance, which is available through the teleporter.

The next door is on the right of the entrance. From there, go up and activate the terminal that opens a floor hatch. Go down into a large room, and head right. The phantom hammer should be in view - destroy it with weapons.

Climb up, go right, and jump down twice to exit the ship. Head right and down the lift.

Jump through the glass ceiling (or nuke-jump over it) and head left to the left. Go down, and head right until you reach the lift for the exit.

The Sentinel Proxima is a large hovering sphere that, after failing to identify Iji, commences termination. It is heavily armored, and immune to weapons that do armour damage (weapons 1, 2, 6 and their upgraded forms).

It has the following attacks:

The array of weapons is quite powerful, but its attacks can be dodged. Its main weakness its light weight, necessary for levitation, but also making it possible to kick. Kicking it into the electropads on either side causes it heavy damage; each electropad can only be used once, but the computer terminals on the top levels recharge them.

Every so often, Proxima will lower itself to the floor of the "arena" and start charging up its Nuke. During this period, it can be kicked into the electropads more easily.

It is also possible to damage Proxima by jumping over it when it's tractoring itself to you (so that it flies into the electropads).

From the glass ceiling, take a right. The ribbon is behind a shield door and two beasts.

In the area above the floor hatch, you should see a shield door behind a gap. Destroy it with a Hyper Pulse, and jump the gap with your Nuke.

Requires: 3 Health, 4 Assimilate, 10 Tasen (or 3 Assimilate and all weapons)

The supercharge is available by destroying Sentinel Proxima, without knocking it into the electric fields.

If you can, take a look at some of the constellations within the sky.

Vateilika will appear within the vessel if you've followed a generally pacifist route (5 kills or fewer per sector), and can trade some nano for a health and ammo refill. If she isn't there, a Komato Berserker takes her place.

After leaving the vessel, you'll head down a lift. There's a seemingly useless ledge on the other side of a glass floor, which can be jumped over with a Nuke; this skips a small area.

If you opt to take the second lift, you can find a breakable wall if you move it as high as it can go. The wall reveals the cracker's hideout, and a plush doll.