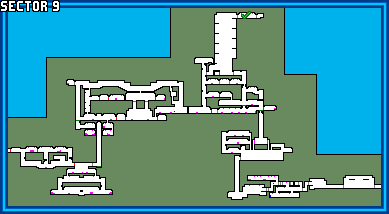 You are commencing your approach to General Tor. While he is still a sector away, you still need to go through the sector.

Head right through the first area. If you want, you can use the Tasen Shredder, but it won't go far. In the second room, head to the bottom and use the terminal to open the door. Head back up and to the right.

Once you go up the lift, an assassin will try attacking you through a wall. Jump over the shots and head up. The assassin will dodge most attacks, but will flee when you go into the electric area, a place he isn't familiar with.

In this large area, you need to activate four terminals to open the large bulkhead. They are located:

After the bulkhead, you need to head down the lift to the right. Depending on your skill levels, you can either go directly, or take the scenic route at the top (which alerts an assassin.)

When you are at the rightmost lift, move it up to allow passage down the shaft below. You then have to double back and reach the leftmost shaft before you can return to the right shaft. If you can't bypass the doors at the bottom, you will also have to move up the second elevator as well.

Jump down, and you'll enter combat with a second assassin. Destroy the glass window to the right, and jump down. Jump to the alcove to the right, and activate the terminal to open access to the Tasen fortification.

Once you go down, you will be attacked by heavy turrets. Destroy or dodge them as necessary.

Crack the first two doors to the base, and once through, jump up and collect ammo to the left. Return to the base to find that it was ransacked; take the exit to the right.

Her main attack involves firing a variety of weapons, which are easily dodged.

The fastest way to kill her is to jump on the platforms above, and quickly jump off. Doing so for the first two times for a given platform will weaken it, while the third time will destroy the platform and hit whatever is underneath it. If Iosa is below the platform, she will take damage.

Use the computer terminal in the center to re-extend the platforms.

After destroying her annihilator, she will attempt to hit you in hand-to-hand combat. Her nanoshield will make her immune to all of your nano weapons, and as such, you will have to dodge her attacks (in the direction that appears.)

She will pause shortly after performing her horizontal swipe attack (dodged by ducking) - at that point, kick her back to the wall, and when she is dazed, commence a cracking attempt on her.

When her shield is down, she will be killed in the proceeding cutscene.

In the area past the bulkhead, the ribbon is up the first shaft and in the left of the interrogation room.

In the large area, equip the MPFB Devastator. Jump onto the first ledge, walk up to the left wall, and fire. The explosion will propel you to the other side of the room, where you can repeat it until you reach the top.

Tasen Soldier KG111:PAIE is holed up here. If her girlfriend from Sector 3 was spared, she will use the teleporter, otherwise it's deactivated.

Requires: Sparing the girlfriend from Sector 3. The final Tasen outpost has a teleporter on the bottom floor. This leads to Deep Sector, which contains a supercharge at the bottom.

After collecting the supercharge, you will be attacked by a large team of assassins.

You can get the Banana Gun if you have all eight weapons. It is located to the right of the poster.

If you enter Deep Sector and already have the support of Ansaksie, you will receive assistance during the fight with Iosa. In addition, Anaskie will kill her for you.