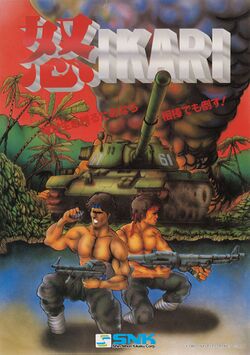 Ikari Warriors is a 1986 arcade game developed by SNK (published in the United States and Europe by Tradewest). Known simply as Ikari (lit. "Anger" or "Fury") in Japan, this was SNK's first major breakthrough US release and became something of a classic. The game was released at the time when there were many Commando clones on the market. What made Ikari Warriors instantly distinct were its use of rotary joysticks and the allowing simultaneous play by two people.

Ikari Warriors involves Ralf Jones and Clark Steel of the later The King of Fighters series (known outside of Japan as Paul and Vince in the Ikari series) battling through hordes of enemies. As stated by designer Keiko Iju, the game was inspired by the then-popular Rambo films and takes its name from the Japanese title of Rambo: First Blood Part II (Rambo: Ikari no Dasshutsu or "The Furious Escape"). Ralf and Clark also make an appearance as playable characters in Metal Slug 6.

The player (or players) takes the role of a commando-like warrior, who must try to reach the village of Ikari. Enemy units attempting to kill the player include tanks, enemy soldiers and helicopters. A number of power-ups along the way can help the player to achieve victory.

Ikari Warriors was one of the first games to use rotary joysticks: those which could be rotated in addition to being pushed in eight directions. The game also featured two buttons, one for the standard gun and another for lobbing grenades. The game also allowed two players to play cooperatively, side by side - one of the few games to do so at the time - and to use vehicles, such as a tank.