Indy 500 (released as Race under the Sears Telegames label) was one of the nine Atari 2600 titles that launched with the system in 1977. There are four different styles of game contained on the cartridge, each with their own variations. In "Race Car," you drive around two styles of race tracks in an effort to complete the most laps. In "Crash n' Score" you must crash your car into a target as many times as possible before time runs out. Be the winner of "Tag" by outlasting your opponent as "not it." And compete on a slippery ice covered track in "Ice Race." Time trial versions of each game last 60 seconds, while other versions end when a certain score is attained.

Indy 500 is a simplified presentation of Atari's many early arcade racing games such as Grand Trak 10, and Sprint 4. After revolutionizing the arcade scene with Pong, and subsequently losing the market to a number of companies manufacturing Pong clones, Atari looked for a way to differentiate itself from the other Pong makers, and created an elaborate system of racing games that presented the track from a bird's eye view, and allowed players to steer their vehicle with an actual steering wheel.

The Indy 500 cartridge came packaged with a pair of additional controls called the Driving Controllers. They looked and felt nearly identical to Atari's ordinary Paddle Controllers, except that the knob could rotate indefinitely, where as the Paddles could only turn so far in either direction. This allowed players to continue to rotate their car beyond 360 degrees. One player games were presented as time trials while two player games were lap competitions. The difficulty switches gave the player control over just how fast each car could travel. 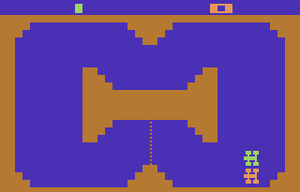 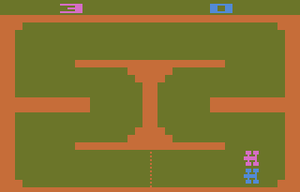 Game variations 1 through 4 are the "Race Car" games. You control a car and steer it around an easy track (game 1 and 2) or a difficult track (game 3 and 4) known as Devil's Elbow, in an effort to score as many laps as quickly as possible. If you collide with your opponent, your directions are slightly adjusted beyond your control, and you will need to correct your orientation. If you drive off-course and into the barriers, you will continue driving, but your car will drive at the slowest speed. Get back on to the road as quickly as possible. Games 1 and 3 are a two player competition for the first player to complete 25 laps. Games 2 and 4 are a single player time trial mode to see how many laps you can complete in 60 seconds. 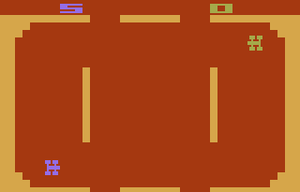 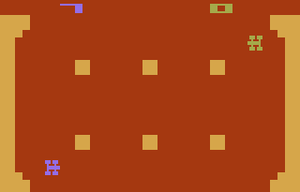 Game variations 5 through 8 are the "Crash n' Score" games. Your goal is to steer your car and cause it to crash into the white target square as much as possible. When you collide with the square, you are awarded one point, and the square temporarily disappears, only to reappear in a new random location. Two different courses are available, one with more barriers (game 5 and 6), and one that is more open (game 7 and 8). If you drive off on side of the screen, you will reappear on the opposite side. Avoid driving through the barriers or your car will travel at the slowest speed. Games 5 and 7 are a two player competition for the first player to capture the square for themselves 50 times. Games 6 and 8 are a single player time trial mode to see how many squares you can catch in 60 seconds. 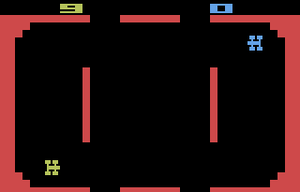 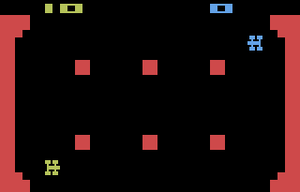 Game variations 9 and 10 are the "Tag" games. Tag is a two-player only game, and can not truly be played by only one player. Each player controls their car as they drive throughout each course. Two different courses are available, one with more barriers (game 9), and one that is more open (game 10). One player's car is IT, indicated by the fact that his or her car is blinking. The non-blinking car must stay away from the blinking car for as long as possible. If the blinking car is able to tag the non-blinking car, the driver of the non-blinking car becomes IT, and the roles of each player will switch. For every second that pass, the non-blinking car earns one point. The first player to achieve a score of 99 points wins the game. 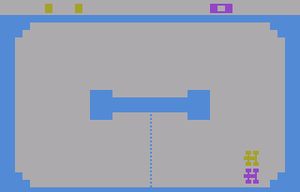 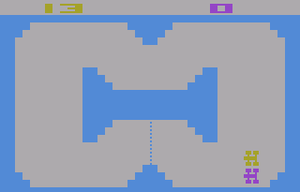 Game variations 11 through 14 are the "Ice Race" games. Ice Race is much like "Race Car", except that the track is covered with ice and is much more slippery. Your car will slide across the track when taking sharp turns, so you may wish to slow your car down when taking turns in order to maintain better control. If you slide into a barrier, you will immediately slow down and regain control over your car. You can drive around the simple Ice Sprint track (game 11 and 12) or an icy version of the easy Race Car track known as the Ice Rally track (game 13 and 14). Games 11 and 13 are a two player competition for the first player to complete 25 laps. Games 12 and 14 are a single player time trial mode to see how many laps you can complete in 60 seconds.