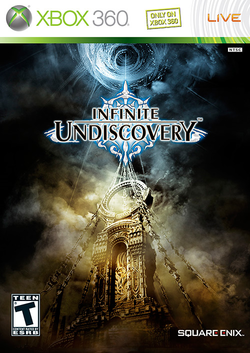 Infinite Undiscovery (インフィニット アンディスカバリー, Infinitto Andisukabarī?) is an action RPG developed by tri-Ace and published by Square-Enix exclusively for the Xbox 360. The game was released during September 2008 in Europe, Japan, and North America. This marked the first attempt by Square-Enix to release a game in all 3 regions simultaneously.

According to tri-Ace co-founder and R&D programmer Yoshiharu Gotanda, this game is set to contain 10 years worth of ideas that can finally be realized by the power of the Xbox 360 and that with it, "RPGs will undergo a true evolution." To achieve this, the game puts the player through "situational battles" (affected by changes that take place in real time) that will lead to "unknown discoveries" and cause permanent changes to the world.

Taken from the official website: "The life-giving moon, the symbol of status and power to all who walk the planet, has been ensnared by the Order of Chains. Led by its enigmatic leader, the Dreadknight, the Order has constructed massive chains to lock the moon in its position in the heavens. The sinister power of these chains spawns foul and deadly creatures that blight the land. Crops fail. Trees wither. Humanity cries out for salvation. Deep in the Graad Woods stands a prison controlled by the Order of Chains..."