If you haven't gone to Trade Co HQ yet, do so. You need to ask around for your next objective. First, if you haven't upgraded you weapons yet, get some artillery or rockets from Yunqi or Eshk. The UHC is now trying to kill you in earnest, and they will have artillery. Also, you will need five units of Water. If you don't have some from Gadaad, get them from Eshk while you're getting the rockets.

Talk to the Human in the right side of the landing bay. Pump her for information until you get the Horizon Report. Then go to Brand. 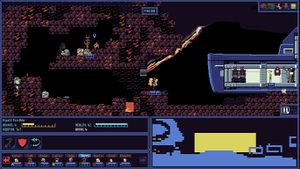 Most crew will fall in the lava without some help.

Go to the extreme right and talk to the Kaidun for directions. He'll tell you to get a card from a nearby cave. Go left to find the cave. Stand one level down from the landing site to kill the first shadowy Stealth Cat. Stand between the lava pit and the door to kill the second one. Try to time your jump to the upper platform so that the third Stealth Cat will be on the right. Guard as soon as you land your jump. Collect the keycard, Firestone, and Raw Dynium, then return to your ship and visit the Field landing site. 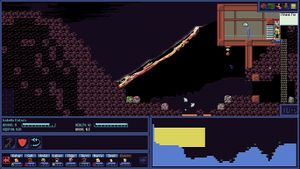 The lower opening will be locked if you missed the keycard.

Guard across the small gap from the first two Stealth Cats to kill them. The next one will have to be fought at close range. The fourth Stealth Cat can be hit from a distance, but you may have to keep moving certain crew back onto its level. Hop down and kill the fifth monster when it is on the right, then move down one more level to shoot the sixth Stealth Cat. Jump across the lava pits and try to dodge the lava drip as you continue right. If you have any sniper rifles, you may need to keep moving their owners out of the way of the drip as you kill the last Stealth Cat. Talk to the blue Android and ask him about warehouse coordinates. He'll ask for five units of Water. The Android will give you coordinates to the Warehouse. Collect the resources and go there. 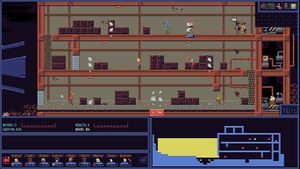 You can run past the enemies, but you will need healthpacks.

Enter the building and kill the two guards from between the door and the first drip. Use the same tactics on the second and third stories. When you talk to the officer, he'll turn hostile. Range your crew for battle before you talk to him. The charm will pop out when you click "Wait!" If you don't want to kill him, you can grab it and run. Collect the assorted resources and prepare your crew for a long voyage.