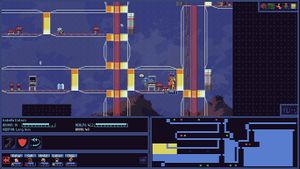 Going up the right tube would result in an ambush.

Before landing, you will be greeted by a Kursha who wants you to leave. Ignore that part of his advice. Clear the tube you land in of Kursha by disembarking your Long Guns and Goo Gun. Have them guard until the Kursha start firing, and then embark until they move away again. Keep coming back out until the Kursha are dead. Then go down, right, and down without talking to the Kursha (else he turns hostile). Kill the two Kursha from the ladder you just climbed down. Go right and up to reach a switch. Press it, but don't talk to this Kursha either. Climb back down and keep going down, bringing your whole crew this time. Remember to watch your health and ammunition as you fight these Kursha. When you have killed all of them, continue left and grab the coins and the Human Skull. It will unlock your next destination. If you wish, you can keep fighting Kursha to potentially get some Sniper Rifles and access to more resources. Otherwise, collect the accessible resources (be sure to get five Waters for later) and leave the planet.

While you are on your way to the new planets, you will encounter an enemy out of nowhere. Avoid red text as long as possible while you talk to him. His ship will have Shields and Armor each at ten. He fires high volumes of small projectiles. Dodge his projectiles as well as you can while firing at him. Then continue on your way.