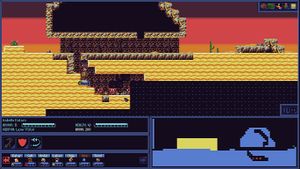 The Raw Dynium is not worth the hassle.

Step down from the landing platform when the Scorpion is away from it and then guard. Scorpions attack with poison that ignores armor and slows you down. Kill the second scorpion from a distance. Any inaccurate weapons you still have around will help. Kill the group of Scorpions under the hill from the left side of the hole. Ignore the Scorpions in the hole. A Vulture will attack on the other side of the hill. Try to avoid fighting it and any of the scorpions at the same time. The last Scorpions after the second big hill can be killed from the other side of the valley. Talk to the first Human in the third building before heading for Kibou.

Land at the Trade Post. Talk to the first Human for the code word. Talk to the Human between the two trade stations and hire him. Buy him a shotgun at the right trade station unless you still have spare weapons. Then return to New Terra.

The Unrestricted drop point probably won't have re-spawned. If it did, just fight the Scorpions again or run past them to get to the buildings. If you choose to run, send your healthiest crew member to limit the number of healthpacks required to get through. The Human you talked to before will give you a new drop point. 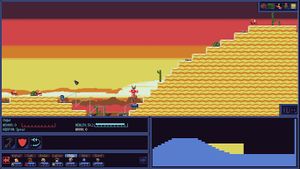 You can either fight your way left or make a run for it. If you run, be prepared to use multiple healthpacks. Talk to the Human and then return to your ship.