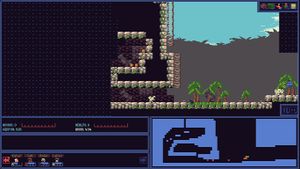 Do not jump down while the Big Dinos are visible.

Land at the Capitol Village. Start by going right and selling your old armor and Ancient Artifacts. This is a good time to upgrade your ship weapons if you have not already done so. Then continue right and talk to the chief. Select "How can I help?" then "I'll help." Go to the Jungle drop site. Climb down and fight the small yellow Spit Lizards running around below the ladder. Next, enter the cave and fight the two Big Dinos. Keep going left and then climb up. One last Big Dino will be guarding the lost girl. Talk to her. Before you return to the chief for another task, you may want to kill the Spit Lizards on the right and harvest the Fruits and Vegetables.

If you harvested 15 Fruits and Vegetables on your first visit to the Jungle, you can hand them over and skip this section. If you did not and you want to avoid fighting, you can travel to Wiegre and buy some Fruits and Vegetables. Otherwise, return to the Jungle. It will have respawned, so you will need to fight the lowest Spit Lizards and Big Dinos again before moving on to those on the right. (You can skip the two Big Dinos higher up in the cave.) You will probably have to return to your ship to recharge ammunition and health. Collect all the fruit. If you don't find 15, you can go to the Capitol Village to train your crew while you wait for the Jungle to re-spawn, or you can just go to Wiegre for as many as you need. This is where the Long Guns are useful.

Before you return to the Jungle, you should hire and arm another crewman at Anoa. You should also replace your Needle Pistols with Anoa Long Guns. Then you can land and cross the new bridge. Kill the Big Dinos from the level of their heads. Then fight the Spit Lizards. Recharge your ammunition and then fight the Giant Dino here. You will probably have to recharge your health due to the cramped space. After defeating the first Giant Dino, climb down the hill and fight the Spit Lizards as you did before. Then use the shoot-and-jump tactics to kill the second Giant Dino. Alternately, you can fight the lower Giant Dino first and then fight the upper one. Harvest all the Fruits and Vegetables. Return to the Capitol Village to get a Worry Doll and your next destination.